The Masters: Golf, Money, and Power in Augusta, Georgia (Paperback) 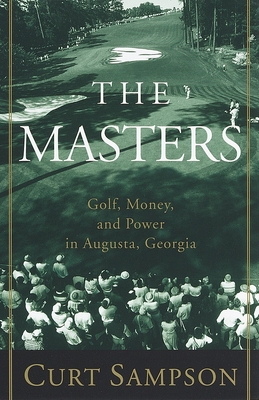 The Masters: Golf, Money, and Power in Augusta, Georgia (Paperback)


Available to Order - Usually Arrives in Our Store in 4 to 7 Days
The Masters golf tournament weaves a hypnotic spell. It is the toughest ticket in sports, with black-market tickets selling for $10,000 and more. Success at Augusta National breeds legends, while failure can overshadow even the most brilliant of careers. But as Curt Sampson, author of the bestselling Hogan, reveals in The Masters, a cold heart beats behind the warm antebellum façade of this famous Augusta course. And that heart belongs to the man who killed himself on the grounds two decades ago. Club and tournament founder Clifford Roberts, a New York stockbroker, still seems to run the place from his grave. An elusive and reclusive figure, Roberts pulled the strings that made the Masters the greatest golf tournament in the world. His story—including his relationship with presidents, power brokers, and every golf champion from Bobby Jones to Arnold Palmer to Jack Nicklaus—has never been told. Until now.

The Masters is an amazing slice of history, taking us inside the presidency of Dwight D. Eisenhower, Augusta's most famous member. It is a look at how the new South coexists with the old South: the relationships between blacks and whites, between Southerners and Northerners, between rich and poor—with such characters as James Brown, the Godfather of Soul; the great boxer Beau Jack; and Frank Stranahan, the playboy golfer and the only white pro ever banned from the tournament. The Masters is a spellbinding portrait of a tournament unlike any other.
Curt Sampson was a junior, amateur, and college golfer. He has written three other books: The Eternal Summer, Full Court Pressure, and Hogan.

Sampson lives in Ennis, Texas, with his wife and two children.

"Jack Nicklaus may own six green jackets, but no one has captured the Masters like [Curt] Sampson."
--The (Baton Rouge) Advocate

"Sampson has put together a great story of a powerful institution."
--Austin.Citysearch.com

"[Curt Sampson's] fine new book, The Masters, is the only
way we mortals are ever going to gain entrée to the hallowed Augusta National Golf Club." --The Dallas Morning News