Don't Sleep, There Are Snakes: Life and Language in the Amazonian Jungle (Hardcover) 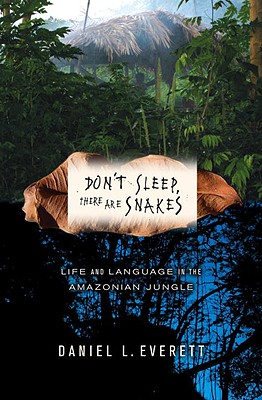 By Daniel L. Everett
$26.95
Special Request - May Not Be Available

A riveting account of the astonishing experiences and discoveries made by linguist Daniel Everett while he lived with the Pirahã, a small tribe of Amazonian Indians in central Brazil.

Everett, then a Christian missionary, arrived among the Pirahã in 1977–with his wife and three young children–intending to convert them. What he found was a language that defies all existing linguistic theories and reflects a way of life that evades contemporary understanding: The Pirahã have no counting system and no fixed terms for color. They have no concept of war or of personal property. They live entirely in the present. Everett became obsessed with their language and its cultural and linguistic implications, and with the remarkable contentment with which they live–so much so that he eventually lost his faith in the God he’d hoped to introduce to them.

Over three decades, Everett spent a total of seven years among the Pirahã, and his account of this lasting sojourn is an engrossing exploration of language that questions modern linguistic theory. It is also an anthropological investigation, an adventure story, and a riveting memoir of a life profoundly affected by exposure to a different culture. Written with extraordinary acuity, sensitivity, and openness, it is fascinating from first to last, rich with unparalleled insight into the nature of language, thought, and life itself.

Daniel L. Everett is the Chair of Languages, Literatures, and Cultures at Illinois State University.

"Absorbing. . . . Don't Sleep, There Are Snakes . . . shares its author's best traits: perseverance, insight, humor and humility. Both the Pirahas and their interpreter make splendid company, especially for readers drawn to the way language underpins how we mediate our world."--Cleveland Plain Dealer

"In this fascinating and candid account of life with the Pirahã, Everett describes how he learned to speak fluent Pirahã (pausing occasionally to club the snakes that harassed him in his Amazonian "office"). He also explains his discoveries about the language-findings that have kicked off more than one academic brouhaha."--Publishers Weekly, Signature Review

"Rich account of fieldwork among a tribe of hunter-gatherers in Brazil . . . introduce[s] non-specialists to the fascinating ongoing debate about the origin of languages. . . . Everett's experiences and findings fairly explode from these pages and will reverberate in the minds of readers."--Kirkus, starred review

“Dan Everett has written an excellent book. First, it is a very powerful autobiographical account of his stay with the Pirahã in the jungles of the Amazon basin. Second, it is a brilliant piece of ethnographical description of life among the Pirahã. And third, and perhaps most important in the long run, his data and his conclusions about the language of the Pirahã run dead counter to the prevailing orthodoxy in linguistics. If he is right, he will permanently change our conception of human language.”
–John Searle, Slusser Professor of Philosophy, University of California, Berkeley

“Dan Everett is the most interesting man I have ever met. This story about his life among the Pirahãs is a fascinating read. His observations and claims about the culture and language of the Pirahãs are astounding. Whether or not all of his hypotheses turn out to be correct, Everett has forced many researchers to reevaluate basic assumptions about the relationship among culture, language and cognition. I strongly recommend the book.”
–Edward Gibson, Professor of Cognitive Sciences, Massachusetts Institute of Technology