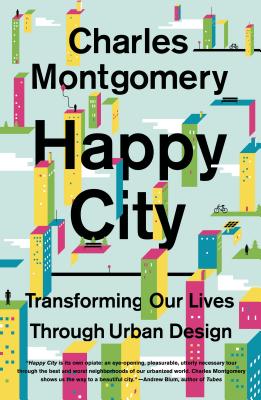 A globe-trotting, eye-opening exploration of how cities can—and do—make us happier people

Charles Montgomery's Happy City is revolutionizing the way we think about urban life.
After decades of unchecked sprawl, more people than ever are moving back to the city. Dense urban living has been prescribed as a panacea for the environmental and resource crises of our time. But is it better or worse for our happiness? Are subways, sidewalks, and condo towers an improvement on the car dependence of the suburbs?
The award-winning journalist Charles Montgomery finds answers to such questions at the intersection between urban design and the emerging science of happiness, during an exhilarating journey through some of the world's most dynamic cities. He meets the visionary mayor who introduced a "sexy" bus to ease status anxiety in Bogotá; the architect who brought the lessons of medieval Tuscan hill towns to modern-day New York City; the activist who turned Paris's urban freeways into beaches; and an army of American suburbanites who have hacked the design of their own streets and neighborhoods.
Rich with new insights from psychology, neuroscience, and Montgomery's own urban experiments, Happy City reveals how cities can shape our thoughts as well as our behavior. The message is ultimately as surprising as it is hopeful: by retrofitting cities and our own lives for happiness, we can tackle the urgent challenges of our age. The happy city can save the world—and we can all help build it.

Charles Montgomery is an award-winning journalist and the author of The Shark God, which won the 2005 Charles Taylor Prize for Literary Non-Fiction under its Canadian title, The Last Heathen.

“Happy City is not only readable but stimulating. It raises issues most of us have avoided for too long. Do we live in neighborhoods that make us happy? That is not a silly question. Montgomery encourages us to ask it without embarrassment, and to think intelligently about the answer.” —Alan Ehrenhalt, The New York Times Book Review

“Beautifully researched, Charles Montgomery's tale cleverly interweaves rigorous inquiry on urban history and the science of happiness with intimate and personal stories that humanize the vast task of understanding urban dynamics. An inspiring book that reminds us that the power to change our cities often lies in our own hands.” —Maria Nicanor, Associate Curator of Architecture and Urbanism, Solomon R. Guggenheim Museum, New York

“Happy City is its own opiate: an eye-opening, pleasurable, utterly necessary tour through the best and worst neighborhoods of our urbanized world. Charles Montgomery shows us the way to a beautiful city.” —Andrew Blum, author of Tubes

“Happy City will fundamentally change the way you see, experience, and feel the place you inhabit. It is a hopeful and optimistic vision of our urban future that uses science to argue what we always should have known: in building the good city, we won't just save our planet. We'll save ourselves.” —Robert Hammond, cofounder of Friends of the High Line

“A brilliant, entertaining, and vital book. Charles Montgomery deftly leads us from our misplaced focus on money, cars, and stuff to consider what makes us truly happy. Then everything changes--the way we live, work, and play in humanity's major habitat, the city.” —David Suzuki, host of CBC's The Nature of Things and cofounder of the David Suzuki Foundation

“Charles Montgomery's message is simple: If we're going to save the world, we must first be happier, and that means creating happier cities. Happy City isn't just a book about urban design written for urban professionals; it's for everyone who's ever wondered if their city could be a better place, and what they can do about it.” —Jarrett Walker, author of Human Transit

“In a word, wow. I thought I had it all figured out, but this is something I was missing. In echoing all the great economic, health, and environmental mandates for walkable cities, I had mostly sidestepped the concept of happiness, thinking it too intangible to discuss in a compelling way. Thank goodness Charles Montgomery has had the guts and the skill to correct my error with this fascinating and entertaining book.” —Jeff Speck, author of Walkable City

“Charles Montgomery writes with rare wit and erudition about the psychology of urban life. A wake-up call for citizens and planners alike, Happy City takes you by the scruff of the neck and shakes you into questioning everything around you. It not only shows us that we must make our cities better, but it tells us how we can.” —Nicholas Humphrey, author of Soul Dust

“I thought I already lived in a happy city: New York. But Charles Montgomery reveals how much happier all of us--kids and adults--can be if we only reconsider what actually contributes to the good life. Suddenly I'm thinking of all the ways we can make millions of people happier. What a great book!” —Lenore Skenazy, author of Free-Range Kids