Medieval Authorship and Cultural Exchange in the Late Fifteenth Century: The Utrecht Chronicle of the Teutonic Order (Paperback) 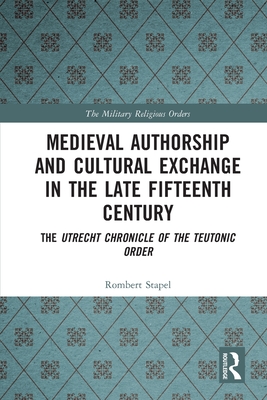 Medieval Authorship and Cultural Exchange in the Late Fifteenth Century: The Utrecht Chronicle of the Teutonic Order (Paperback)

Medieval Authorship and Cultural Exchange in the Late Fifteenth Century is a multidisciplinary study of late medieval authorship and the military orders, framed as a whodunit that uncovers the anonymous author of the 'Utrecht Chronicle of the Teutonic Order'.

Through a close analysis of the Utrecht Chronicle of the Teutonic Order and its manuscripts, and by exploiting a wide range of scholarly techniques, from traditional philology and extensive codicological examinations to modern digital humanities techniques, the book argues that the recently resurfaced Vienna manuscript is actually an author's copy, written in direct cooperation with the original author. This important assertion leads to a reinterpretation of the text, its sources and composition, authorship, and the context in which it was conceived. It allows us to associate the text with an upsurge of historiographical activities by various military orders across the continent, seemingly in response to the publication and aggressive dissemination of the account of the Siege of Rhodes by Guillaume Caoursin in 1480. Furthermore, the text can be positioned at the crossroads between different cultural spheres, ranging from the Baltic region to the Low Countries, spanning French, German, Dutch, and Latin linguistic traditions.

This book will appeal to scholars and students of medieval history, as well as those interested in cultural history and the military religious orders.

Rombert Stapel is a researcher at the International Institute of Social History in Amsterdam, Netherlands. His work encompasses the historiography of the military orders, socioeconomic history of the medieval and early-modern Low Countries, and digital humanities. Currently he is leading a project that studies the population geography of the Netherlands and Belgium from the fourteenth to the eighteenth century.