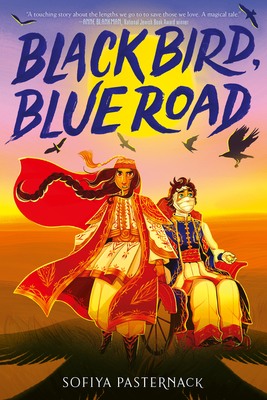 In this historical fantasy novel, praised as a “rich, omen-filled journey that powerfully shows love and its limits*” and “propulsive, wise, and heartbreaking,”** Ziva will do anything to save her twin brother Pesah from his illness—even facing the Angel of Death himself. From Sydney Taylor Honor winner and National Jewish Book Award finalist Sofiya Pasternack.

Pesah has lived with leprosy for years, and the twins have spent most of that time working on a cure. Then Pesah has a vision: The Angel of Death will come for him on Rosh Hashanah, just one month away.

So Ziva takes her brother and runs away to find doctors who can cure him. But when they meet and accidentally free a half-demon boy, he suggests paying his debt by leading them to the fabled city of Luz, where no one ever dies—the one place Pesah will be safe.

They just need to run faster than The Angel of Death can fly...

Sofiya Pasternack is a mental health professional, the highly-distractible author of Jewish fantasy, and prone to oversharing gross medical stories. If you're not careful, she'll holler at you about how to use psychotherapy to improve character development.

Pasternack shows how Ziva’s love of justice drives her, while depicting a world in which spirits are manifest, healers come in many forms, and a bold girl can literally bargain with the Angel of Death. Tenderly rendering Ziva’s feelings of responsibility—including around Pesah’s physical care and amputating his infected fingers and toes—Pasternack imagines a rich, omen-filled journey that powerfully shows love and its limits. — Publishers Weekly (starred review)

Pasternack’s story is rich in the rhythms, values, and deep magic of Jewish culture and life in the Turkic Jewish empire of Khazaria. It revels in an often overlooked mythology, deploying exciting fantasy elements with ease. More than simply an adventure, this is a story about grief and illness and arguing with the rules of the world, enduring and enjoying the living that happens between now and the end, threaded through with the profound, unshakeable love of two brave siblings. Propulsive, wise, and heartbreaking. — Kirkus Reviews (starred review)

Pasternak's historical fantasy weaves Jewish mythology and traditions into this heroine's journey that asks readers to contemplate issues of life and death. Readers will be intrigued by the ravens that follow Pesah everywhere, the details of the city of Luz (where no one dies), and Pesah's vision that the Angel of Death will visit him on Rosh Hashanah. This works as an adventure, but it should also prompt discussions about the ethics of preserving life at all costs.  — Kay Weisman — Booklist (starred review)

Set in Khazaria, a medieval empire of the Eurasian steppes, this moving tale steeped in Jewish lore is a welcome addition to middle grade fantasy shelves. Ziva is a fierce, appealing heroine, driven by her deep love for her brother, a profound sense of justice, and an unwillingness to accept the status quo—qualities that serve her well but sometimes keep her from seeing those around her clearly. An omniscient narrator addresses the reader in interludes that lend the text a mythic feel, while the main narrative is a rousing adventure and coming of age story inflected by Ziva’s internal struggles. — Bulletin of the Center for Children’s Books (starred review)

Pasternack (Anya and the Dragon) writes with a storyteller’s cadence without sacrificing liveliness, keeping emotions front and center (“She’d jab the Angel of Death in every single one of its eyeballs if that meant keeping Pesah safe”).  - SHOSHANA FLAX www.hbook.com — Horn Book Magazine

“A touching story about the lengths we go to to save those we love. A magical tale, beautifully told.” — Anne Blankman, National Jewish Book Award and Sydney Taylor Honor winning author of The Blackbird Girls

“A bit reminiscent of Madeleine L’Engle, a bit reminiscent of The Wizard of Oz, this story… will keep young readers breathless until its heart-rending conclusion.”  — Susan Lynn Meyer, Sydney Taylor Honor winning author of Black Radishes and Skating With the Statue of Liberty

“Unforgettable… Cleverly weaves mythology and Jewish traditions to highlight the incredible courage and resilience of family.” — Chris Baron, author of All of Me and The Magical Imperfect

"A gripping story of two siblings that will do everything they can to save each other… Brilliantly crafted, heartbreakingly beautiful."  — Ally Malinenko, author of Ghost Girl