The Years That Matter Most: How College Makes or Breaks Us (CD-Audio) 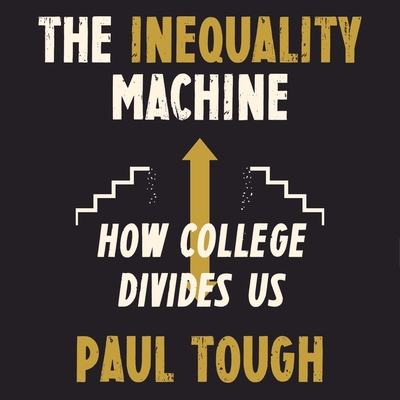 By Paul Tough, Paul Tough (Narrator)
$28.00
Available to Order - Usually Arrives in Our Store in 4 to 7 Days

The best-selling author of How Children Succeed returns with a powerful, mind-changing inquiry into higher education in the United States
Read by the author.

Does college still work? Is the system designed just to protect the privileged and leave everyone else behind? Or can a college education today provide real opportunity to young Americans seeking to improve their station in life?

The Years That Matter Most tells the stories of students trying to find their way, with hope, joy, and frustration, through the application process and into college. Drawing on new research, the book reveals how the landscape of higher education has shifted in recent decades and exposes the hidden truths of how the system works and whom it works for. And it introduces us to the people who really make higher education go: admissions directors trying to balance the class and balance the budget, College Board officials scrambling to defend the SAT in the face of mounting evidence that it favors the wealthy, researchers working to unlock the mysteries of the college-student brain, and educators trying to transform potential dropouts into successful graduates.

With insight, humor, and passion, Paul Tough takes readers on a journey from Ivy League seminar rooms to community college welding shops, from giant public flagship universities to tiny experimental storefront colleges. Whether you are facing your own decision about college or simply care about the American promise of social mobility, The Years That Matter Most will change the way you think—not just about higher education, but about the nation itself.

PAUL TOUGH is the author of Helping Children Succeed and How Children Succeed, which spent more than a year on the New York Times hardcover and paperback bestseller lists and was translated into twenty-eight languages. He is also the author of Whatever It Takes: Geoffrey Canada’s Quest to Change Harlem and America.He is a contributing writer to the New York Times Magazine and a regular contributor to the public-radio program This American Life. You can learn more about his work at paultough.com and follow him on Twitter @paultough.

PAUL TOUGH is the author of Helping Children Succeed and How Children Succeed, which spent more than a year on the New York Times hardcover and paperback bestseller lists and was translated into twenty-eight languages. He is also the author of Whatever It Takes: Geoffrey Canada’s Quest to Change Harlem and America.He is a contributing writer to the New York Times Magazine and a regular contributor to the public-radio program This American Life. You can learn more about his work at paultough.com and follow him on Twitter @paultough.

“Indelible and extraordinary, a powerful reckoning with just how far we’ve allowed reality to drift from our ideals.”
—Tara Westover, author of Educated: A Memoir, New York Times Book Review

“Gorgeously reported. Vividly written. Utterly lucid. Paul Tough jumps skillfully between deeply engaging personal narratives and the bigger truths of higher education. The way he tells the stories of these students, it’s impossible not to care about them and get angry on their behalf.”
—Ira Glass, host, This American Life

“A stunning piece of work. The Years That Matter Most is ostensibly about higher education, about the college experience—and on that level, it’s a completely absorbing narrative with some very surprising, trenchant analysis. But it’s also a lot more than that. It’s a book about class in America. It’s a book about social mobility. And it’s a devastating report card on the American dream. It’s just a very special book.”
—Michael Pollan, author of How to Change Your Mind (at WBUR’s CitySpace)

“I’m reading this riveting & enlightening book by Paul Tough and it’s making me furious about higher ed in the US & also furious about my experience as a poor, smart, ambitious kid in rural MN who hadn’t a CLUE about the way college admissions work (or any help getting into one).”
—Cheryl Strayed, author of Wild (via Twitter)

“What’s best about the book, a fruit of all the time Tough spent with his subjects, is that it humanizes the process of higher education. He has fascinating stories about efforts to remediate class disparities in higher education, some of which have succeeded and some of which may have made matters worse.”
—Louis Menand, The New Yorker

“A complex, essential book that asks an urgent question: Is our current higher education system designed to protect the privileged and leave everyone else behind? A fascinating, troubling read.”
—Heidi Stevens, The Chicago Tribune

“Paul Tough’s important new book on the broken promises of higher education begins with a chapter that he succeeds in making as suspenseful as the prologue of any serial-killer novel and as heart-rending as the climax of an epic romance . . . Among his book’s many vital contributions are its portraits of schools and programs that model a better way.”
—Frank Bruni, New York Times

“A comprehensive, moving account of the inequalities that block many poor, minority and first-generation students from realizing the benefits of a college education.”
—Michael T. Nietzel, Forbes

“Paul Tough’s daring The Years That Matter Most forces us to unfold the suffering built into the creases of American higher education. It refuses to let us forget about the bodies and lives of real students. It should be necessary reading for every student, professor, administrator, and trustee in this country interested in what radical revision looks like.”
—Kiese Laymon, author of Heavy: An American Memoir

“Paul Tough is a thinker to cherish: formidably clear-eyed, incandescently learned, and unshakably hopeful. Diving deep into the rewards, challenges, and perils of the American university system, The Years That Matter Most reveals the heavy price a society pays when it no longer pulls together to give its young people the education they need. An extraordinary, indispensable book.”
—Junot Diaz, Pulitzer Prize–winning author of The Brief Wondrous Life of Oscar Wao

“Paul Tough is a beautiful reporter and writer and a deeply moral guide to understanding the situation of children in our heartless meritocracy. The Years That Matter Most is a great book that should start a necessary conversation about the high cost of the race to the top.”
—George Packer, author of The Unwinding: An Inner History of the New America and Our Man: Richard Holbrooke and the End of the American Century

“All of the books by best-selling author Paul Tough have been meaningful . . . [The Years that Matters Most] arrives at the very moment when energized voters are pressing presidential hopefuls on how they would help all young people reach a middle-class life.”
—Esther Cepeda, syndicated columnist

“Does for college admissions what Michael Lewis’s Moneyball did for sabermetrics . . . The bright, hopeful sections are a source of inspiration and joy.”
—Jessica Lahey, Air Mail

“[Tough] writes movingly about students who are trying to navigate the confounding, expensive, and intimidating process of getting into and staying in college.”
—Wired

“Paul Tough’s new book makes the powerful case that the system just isn’t as fair as it should be.”
—Katie Couric, Wake-Up Call

“A deeply reported and damning portrait of fraying American social mobility . . . a clear-eyed portrait of what a stacked game it really is.”
—Quartz

“Drawing on broad reading and visits to campuses across the country, Tough’s work offers an indictment of American society and political structures and persuasively argues that universities must fulfill the American commitment to equality of opportunity.”
—Library Journal, starred review

“Tough clearly shows that college placement remains mostly about wealth at the expense of a collective educational environment. A good choice for aspiring college students and their parents.”
—Kirkus Reviews

“In this fascinating study, education journalist Tough (How Children Succeed) argues persuasively that access to an elite college education, which in the U.S. is popularly believed to be a meritocratically distributed social equalizer, is in fact distributed in ways that reinforce existing economic divisions... His analyses of data are sound, his portraits of students and teachers sympathetic, his argument neatly structured, and his topic one with wide appeal. This well-written and persuasive book is likely to make a splash.”
—Publishers Weekly

“Tough’s book explores the real and terrifying idea that what you do (or don’t do) between the ages of 18 and 22—or even 16 to 25—profoundly shapes the course of your life . . . moving and memorable.”
—The Hechinger Report

“A timely reassessment of the promise that higher education offers everyone the same opportunity to move up in the world . . . no big players escapes Tough’s critical eye.”
—Rebecca Koenig, EdSurge

“By combining rigorous research with compelling personal narratives, Tough crafts a work that is not only a status report on the changing world of higher education, but also a revelatory look at how social mobility works in America.”
—Brendan Dowling, Public Libraries Online