Ill Will: A Novel (Hardcover) 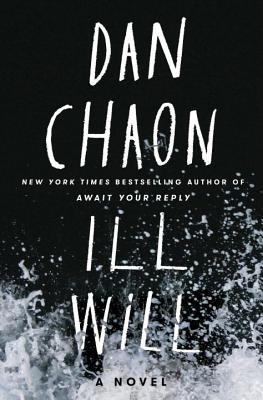 Ill Will: A Novel (Hardcover)

“Ill Will is a house of mirrors reflecting intergenerational psychodramas in which the abuses of a parent insidiously infect subsequent generations. Violent parricide, false memories, drugs, and sex fuel a double plot line and vivid character development and taut dialog propel the reader as scene shifts blur the roles of the offender and the injured. Chaon adroitly leads us through a literary haunted house, then leaves us to find our own way out.”
— Bill Fore (W), Hickory Stick Bookshop, Washington Depot, CT

NATIONAL BESTSELLER • Two sensational unsolved crimes—one in the past, another in the present—are linked by one man’s memory and self-deception in this chilling novel of literary suspense from National Book Award finalist Dan Chaon.

“We are always telling a story to ourselves, about ourselves.” This is one of the little mantras Dustin Tillman likes to share with his patients, and it’s meant to be reassuring. But what if that story is a lie?

A psychologist in suburban Cleveland, Dustin is drifting through his forties when he hears the news: His adopted brother, Rusty, is being released from prison. Thirty years ago, Rusty received a life sentence for the massacre of Dustin’s parents, aunt, and uncle. The trial came to epitomize the 1980s hysteria over Satanic cults; despite the lack of physical evidence, the jury believed the outlandish accusations Dustin and his cousin made against Rusty. Now, after DNA analysis has overturned the conviction, Dustin braces for a reckoning.

Meanwhile, one of Dustin’s patients has been plying him with stories of the drowning deaths of a string of drunk college boys. At first Dustin dismisses his patient's suggestions that a serial killer is at work as paranoid thinking, but as the two embark on an amateur investigation, Dustin starts to believe that there’s more to the deaths than coincidence. Soon he becomes obsessed, crossing all professional boundaries—and putting his own family in harm’s way.

From one of today’s most renowned practitioners of literary suspense, Ill Will is an intimate thriller about the failures of memory and the perils of self-deception. In Dan Chaon’s nimble, chilling prose, the past looms over the present, turning each into a haunted place.

Praise for Ill Will

“The scariest novel of the year . . . ingenious . . . Chaon’s novel walks along a garrote stretched taut between Edgar Allan Poe and Alfred Hitchcock.”—The Washington Post
Dan Chaon is the acclaimed author of Among the Missing, which was a finalist for the National Book Award; You Remind Me of Me, which was named one of the best books of the year by The Washington Post, San Francisco Chronicle, and Entertainment Weekly, among other publications; Await Your Reply, which was a New York Times Notable Book and appeared on more than a dozen best-of-the-year lists; and Stay Awake. Chaon has been a finalist for the National Magazine Award in Fiction, and he was the recipient of the 2006 Academy Award in Literature from the American Academy of Arts and Letters. He lives in Cleveland, Ohio, and teaches at Oberlin College, where he is the Pauline M. Delaney Professor of Creative Writing.
“In his haunting, strikingly original new novel, [Dan] Chaon takes formidable risks, dismantling his timeline like a film editor and building the narrative with short, urgent chapters told from a few key perspectives. . . . As the story spins toward its inexorable conclusion, only the reader ascertains what is happening—a sinking realization that rattles the psyche and interferes with sleep. I read the concluding sections with increasing horror; the ending, twisting in the author’s assured hands like a Rubik’s Cube, is at once predictable and harrowing. Somehow, it resolved nothing and left me shaken. I believed this could happen—I believed all of it—and the only thing more terrifying than that is the possibility of another Dan Chaon novel. I will be nervously looking forward to it.”—The New York Times Book Review

“The scariest novel of the year . . . ingenious . . . By now we should all be on guard against Dan Chaon, but there’s just no effective defense against this cunning writer. The author of three novels and three collections of short stories, he draws on our sympathies even while pricking our anxieties. Before beginning his exceptionally unnerving new book, go ahead and lock the door, but it won’t help. You’ll still be stuck inside yourself, which for Chaon is the most precarious place to be. . . . There’s something irresistibly creepy about this story, which stems from the thrill of venturing into illicit places of the mind. . . . Chaon’s novel walks along a garrote stretched taut between Edgar Allan Poe and Alfred Hitchcock. By the time we realize what’s happening, we’ve gone too far to turn back. We can only inch forward into the darkness, bracing for what might come next.”—The Washington Post

“Powerful . . . Chaon is one of America’s best and most dependable writers, and in the end, Ill Will is a ruthlessly ‘realistic’ piece of fiction about the unrealistic beliefs people entertain about their world.”—Los Angeles Times

“Spanning more than thirty years, this intriguing novel about a tightly wired criminal psychologist with a murky past has the tension of a thriller plus the emotional release of justice finally served.”—O: The Oprah Magazine

“Powerfully unsettling . . . A ranking master among neo-pulp stylists, Chaon adds to the book’s disorienting effects by playing with the physical text. Some chapters take the form of parallel columns, two or three to a page. White spaces and uneven alignments push words, sentences—and thoughts—apart. . . . While such touches underscore the author’s playful approach, the writerly stagecraft keeps the reader off guard and sometimes on edge, in a kind of altered cognitive state. There’s a lot going on under the surface of Ill Will—more than one reading will reveal. Going back and reading this oddly compelling book again will only provide more pleasure.”—Chicago Tribune

“Terrifically eerie . . . The thriller transcends its genre to become a fascinating study in generational trauma. . . . Too few writers prize atmosphere as much as narrative tautness. With Ill Will, Chaon succeeds at delivering both.”—The Dallas Morning News

“Outstanding . . . Following writers like Richard Matheson and Shirley Jackson, Dan Chaon writes in the spooky tradition of suburban gothic. . . . An unreliable narrator can often feel like a cheap trick in the novelist’s playbook, but Mr. Chaon employs it masterfully, integrating unreliability into the book’s very typography. . . . Mr. Chaon’s writing is cool and precise, but his story is thrillingly unstable. It also boasts, at the end, a traditional horror-novel payoff I didn’t see coming—Stephen King couldn’t have done it better.”—The Wall Street Journal

“One of the best thrillers I’ve encountered in a very, very long time, Dan Chaon’s latest novel will chill you to the bone and keep you guessing at every turn.”—Newsweek

“If you’re up for being caught in a seamy heartland underbelly of fear, superstition, and paranoia, with side excursions through urban legend and recovered-memory hysteria, Ill Will is your book. . . . Chaon’s powers of description are impressive. . . . His knack for leaving sentences tellingly unfinished and thoughts menacingly incomplete . . . is perfect.”—The Boston Globe

“Reading a truly terrifying novel can make you feel like you’re drowning: As much as you may want to surface and catch your breath, the plot holds you in its grip. . . . As Chaon moves nimbly between viewpoints, calling memories and relationships into question, a powerful undercurrent of dread begins to form beneath the story, slowly but inexorably pulling you under.”—Entertainment Weekly

“Imagine the shower scene in Psycho, extended across eleven sections and three decades, with multiple unsolved mysteries. That’s the level of intensity Chaon achieves in this dark, provocative thriller.”—BBC

“Chaon faithfully carries out his responsibility to keep the mystery plots . . . simmering in a pressure cooker of suspense and emotion. While doing so, he manages to summon the atmospheres of Truman Capote’s In Cold Blood and Thomas Harris’s The Silence of the Lambs.”—Shelf Awareness

“In Chaon’s capable hands, [Ill Will] is a brilliant depiction of mental illness. Not a pretty picture, but masterfully painted.”—BookPage

“Intensely readable . . . In this creepy yet fascinating work, with a bleak Ohio wintery landscape as backdrop, Chaon creates a world of tragedy, disease, and drug abuse right out of today’s news and makes it real while keeping readers guessing on many levels.”—Library Journal (starred review)

“Chaon has created another of those twilight realms of which he is an indisputable master. The book’s characters plumb the depths of deception and surpass all established measures of instability and dysfunction. . . . If the definition of eeriness is indeed ‘strange, suspicious, and unnatural,’ the definers of the genre (Edgar Allan Poe, Henry James, Shirley Jackson, Peter Straub, etc.) have a worthy heir in Dan Chaon.”—Booklist

“Dan Chaon’s new novel is subtly, steadily unnerving—like a scalpel slipping under your skin and prying it, ever so slowly, from the muscle beneath. Ill Will is a dark Möbius strip of a thriller that will leave you questioning what’s perceived and what’s imagined, and whether the reverberations of tragedy ever truly come to an end.”—Celeste Ng, author of Everything I Never Told You

“Ill Will not only confirms Chaon as among our country’s finest writers but makes clear that he is one of our bravest and most inventive. He embraces risks that would have most novelists turning pale and making the sign of the cross. It’s stunning. Read it right now.”—Peter Straub, author of The Throat

“Dan Chaon’s darkly stunning Ill Will ensnares you from its very first pages. It’s both a bone-chilling literary thriller and a complicated tale of family secrets and the strange and dangerous paths grief and guilt can take us on—and it is not to be missed.”—Megan Abbott, author of You Will Know Me

“‘I believe in bad places,’ one narrator of Ill Will confesses, and he’s right.  Dan Chaon’s damaged characters stalk the elusive truth and what may be a serial killer through a nightmarish Cleveland populated by drug addicts and sexual predators. Intimate and unsparing, this is one of the creepiest books I've ever read.”—Stewart O’Nan, author of Songs for the Missing

“Ill Will is a literary masterwork, and that rare, true psychological thriller that comes along once in a decade. This novel may be the most honest exploration of deceit ever written.”—Alissa Nutting, author of Tampa

“This novel is brilliant, beautiful, and terrifying. Dan Chaon has written a tender, masterful family story and injected it with a cardiac arrest of a plot. Ill Will keeps you up late into the night, swelling your heart and turning your blood to ice.”—Lily King, New York Times bestselling author of Euphoria