Economic and Political Change in Tunisia: From Bourguiba to Ben Ali (Hardcover) 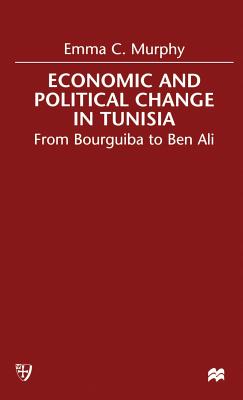 Economic and Political Change in Tunisia: From Bourguiba to Ben Ali (Hardcover)


Available to Order - Usually Arrives in Our Store in 4 to 7 Days
This book examines the processes of economic and political reform in Tunisia, placing the current policies of Zine el Abidine Ben Ali within their historical context. The book develops a theoretical understanding of the relationship between economic liberalisation and political change in the Arab world, developing the concept of the disarticulation of the corporatist state and concluding that, despite efforts at democratization, an authoritarian political system is a more likely successor in the era of economic transformation.
EMMA MURPHY is Lecturer in Middle Eastern Politics at the Centre for Middle Eastern and Islamic Studies, University of Durham. She gained her PhD from the University of Exeter in 1991 with a thesis on the political economy of Israeli - Palestinian relations and has also worked as a research fellow at Exeter's Research Unit for the Study of Economic Liberalisation (RUSEL). Her publication include Economic and Political Liberalization in the Middle East (edited with T.N. Blah).