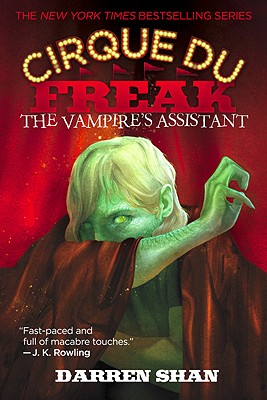 This is book number 2 in the Cirque Du Freak series.

In the tradition of Ray Bradbury's Something Wicked This Way Comes, and Stephen King's Salem's Lot, the nightmare continues for the new vampire's assistant in the popular Saga of Darren Shan.

Darren Shan was just an ordinary schoolboy until his visit to the Cirque Du Freak. Now, as he struggles with his new life as a Vampire's Assistant, he tries desperately to resist the one temptation that sickens him, the one thing that can keep him alive. But destiny is calling. The Wolf Man is waiting.
Darren Shan is the New York Times bestselling author of Cirque Du Freak and The Demonata, whose novels have sold over 15 million copies worldwide. Darren lives in Ireland, where he writes and collects art, comics, and film.