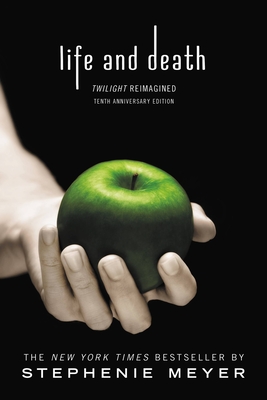 For fans of the worldwide phenomenon Twilight comes a bold reimagining of Stephenie Meyer's novel, telling the classic love story but in a world where the characters' genders are reversed.
There are two sides to every story . . .
You know Bella and Edward, now get to know Beau and Edythe.
When Beaufort Swan moves to the gloomy town of Forks and meets the mysterious, alluring Edythe Cullen, his life takes a thrilling and terrifying turn. With her porcelain skin, golden eyes, mesmerizing voice, and supernatural gifts, Edythe is both irresistible and enigmatic.
What Beau doesn't realize is the closer he gets to her, the more he is putting himself and those around him at risk. And, it might be too late to turn back . . .
With a foreword and afterword by Stephenie Meyer, this compelling reimagining of the iconic love story is a must-read for Twilight fans everywhere.
The series has been praised as New York Times and USA Today bestsellers, a Time magazine Best Young Adult Book of All Time, an NPR Best Ever Teen Novel, and a New York Times Editor's Choice. Enrapturing millions of readers since its first publication, Twilight has become a modern classic, leaving readers yearning for more.
It's here! #1 bestselling author Stephenie Meyer makes a triumphant return to the world of Twilight with the highly anticipated companion, Midnight Sun: the iconic love story of Bella and Edward told from the vampire's point of view.
"People do not want to just read Meyer's books; they want to climb inside them and live there." -- Time
"A literary phenomenon." -- The New York Times
Stephenie Meyer is the author of the #1 bestselling Twilight Saga, The Host, and The Chemist. Twilight has enraptured millions of readers since its publication in 2005 and has become a modern classic, redefining genres within young adult literature and inspiring a phenomenon that has had readers yearning for more. The series has sold 160 million copies worldwide and was made into five blockbuster feature films. Stephenie lives in Arizona with her husband. Her website is stepheniemeyer.com.