Agnes at the End of the World (Hardcover) 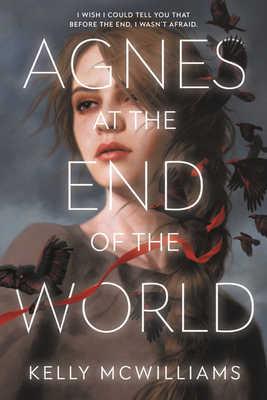 Agnes at the End of the World (Hardcover)

The Handmaid's Tale meets Wilder Girls in this genre-defying novel about a girl who escapes a terrifying cult only to discover that the world Outside has succumbed to a viral apocalypse.

Agnes loves her home of Red Creek—its quiet, sunny mornings, its dusty roads, and its God. There, she cares tirelessly for her younger siblings and follows the town's strict laws. What she doesn't know is that Red Creek is a cult, controlled by a madman who calls himself a prophet.

Then Agnes meets Danny, an Outsider boy, and begins to question what is and isn't a sin. Her younger brother, Ezekiel, will die without the insulin she barters for once a month, even though medicine is considered outlawed. Is she a sinner for saving him? Is her sister, Beth, a sinner for dreaming of the world beyond Red Creek?

As the Prophet grows more dangerous, Agnes realizes she must escape with Ezekiel and leave everyone else, including Beth, behind. But it isn't safe Outside, either: A viral pandemic is burning through the population at a terrifying rate. As Agnes ventures forth, a mysterious connection grows between her and the Virus. But in a world where faith, miracles, and cruelty have long been indistinguishable, will Agnes be able to choose between saving her family and saving the world?
Kelly McWilliams is a mixed-race writer who has always gravitated towards stories about crossing boundaries and forging new identities. For this and so many other reasons, young adult literature will always be close to her heart. Her novel, Agnes at the End of the World, benefitted from a We Need Diverse Books Mentorship.
She has loved crafting stories all her life, and her very first novel, Doormat, was published when she was just fifteen-years old. Kelly has also worked as a staff writer for Romper, covering issues important to women and families. She lives in Colorado with her partner and young daughter. Visit her website at KellyMcWilliamsAuthor.com.
"In a word: beautiful. With Agnes at the End of the World, Kelly McWilliams has crafted an emotional, powerful story, filled with hope and grace and utterly selfless love. Absolutely unforgettable."—p.p1 {margin: 0.0px 0.0px 0.0px 0.0px; font: 13.0px Georgia; min-height: 15.0px}p.p2 {margin: 0.0px 0.0px 0.0px 0.0px; font: 13.0px Georgia}span.s1 {font-kerning: none}Jodi Meadows, NYT bestselling author of My Plain Jane and the Fallen Isles Trilogy

"A powerful story, exquisitely told. Agnes is the antidote we need in our own dystopian times. She filled me with hope!"—p.p1 {margin: 0.0px 0.0px 0.0px 0.0px; font: 13.0px Georgia}span.s1 {font-kerning: none}Bill Konigsberg, award-winning author of Openly Straight and The Bridge

"Unforgettable and full of hope, Agnes at the End of the World is at times beautiful, at others dark. The love that transcends these pages is a triumph."—p.p1 {margin: 0.0px 0.0px 0.0px 0.0px; font: 13.0px Georgia}span.s1 {font-kerning: none}Sarah Glenn Marsh, author of the Reign of the Fallen series

"A truly unique gem of a book. Set during the apocalypse and featuring a disturbing virus and terrifying cult, McWilliams's tale is ultimately one of hope. Agnes is a fascinating heroine-determined, selfless, and brave. I was rooting for her from the very first page."—p.p1 {margin: 0.0px 0.0px 0.0px 0.0px; font: 13.0px Georgia}span.s1 {font-kerning: none}Erin Bowman, Edgar Award-nominated author of Contagion

"Agnes at the End of the World is a carefully woven ode to faith-finding love in the shadow of death and discovering God during the apocalypse. Agnes's journey gripped my heart and kept me turning pages well into the night."—p.p1 {margin: 0.0px 0.0px 0.0px 0.0px; font: 13.0px Georgia}span.s1 {font-kerning: none}Ryan Graudin, award-winning author of Wolf by Wolf and The Walled City

"In Agnes At The End of The World, McWilliams has created a female protagonist whose strength relies, remarkably, not on brute force but in her deep sense of spirituality. From the lyrical prologue to the satisfying climax, young adults will enjoy the journey that transforms Agnes from an oppressed child into a leader fighting for the survival of her world. In these difficult and divisive times, I find it particularly important to read stories explore a protagonist's inner strength and so I was intrigued by McWilliams's plot."—Padma Venkatraman, author, The Bridge Home, Winner of the Walter Award and the Golden Kite Award

"McWilliams delves deeply into the varied and complex relationships between spirituality and idolatry, feminism and patriarchy, love, family, and hope."—Booklist

*"In this near-apocalyptic adventure and spiritual contemplation, McWilliams provides readers with a believable world, deeply drawn relationships, and an inspiring heroine. An empowering narrative and trope-busting plotting earns this book a place on almost every shelf."—School Library Journal, starred review

*The ornate, complex text takes readers through Agnes' and Beth's journeys of reconciling their faith and desires, imbuing her well-rounded characters with purpose.... An excellent read.—Kirkus, starred review