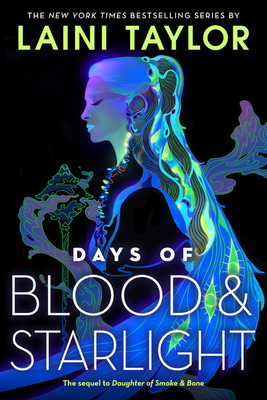 This is book number 2 in the Daughter of Smoke & Bone series.

An art student and monster's apprentice must decide how far she'll go to avenge her people in this riveting sequel to the mesmerizing, acclaimed book Daughter of Smoke & Bone by National Book Award finalist Laini Taylor -- now with a gorgeous new package!
Once upon a time, an angel and a devil fell in love and dared to imagine a world free of bloodshed and war.
This is not that world.
Art student and monster's apprentice Karou finally has the answers she has always sought. She knows who she is -- and what she is. But with this knowledge comes another truth she would give anything to undo: She loved the enemy and he betrayed her, and a world suffered for it.
In this stunning sequel to the highly acclaimed Daughter of Smoke & Bone, Karou must decide how far she'll go to avenge her people. Filled with heartbreak and beauty, secrets and impossible choices, Days of Blood & Starlight finds Karou and Akiva on opposing sides as an age-old war stirs back to life.
While Karou and her allies build a monstrous army in a land of dust and starlight, Akiva wages a different sort of battle: a battle for redemption. For hope.
But can any hope be salvaged from the ashes of their broken dream?
Laini Taylor is the New York Times bestselling author of the Printz Honor Book Strange the Dreamer and its sequel, Muse of Nightmares. Taylor is also the author of the global sensation the Daughter of Smoke & Bone trilogy and the companion novella Night of Cake & Puppets. Taylor's other works include the Dreamdark books: Blackbringer and Silksinger, and the National Book Award finalist Lips Touch: Three Times. She lives in Portland, Oregon, with her husband, illustrator Jim Di Bartolo, and their daughter, Clementine. Her website is lainitaylor.com.


* "Taylor continues to build an irresistible fantasy world in this grim sequel to her masterful Daughter of Smoke & Bone.... Taylor's dazzling writing and skill at creating suspense are strong as ever; fantasy lovers will gobble up this book with satisfaction."—Publishers Weekly, starred review

* "The future of Karou, her ill-fated romance with Akiva, and the survival of both of their races await readers in the concluding volume; it promises to be a doozy."—The Horn Book, starred review

* "Taylor manages to make a five-hundred-page epic read at a breakneck speed that will have readers struggling to finish in one sitting. This sequel to Daughter of Smoke & Bone will paradoxically satisfy readers' desire for more of Karou's story while leaving them begging for the third installment."—VOYA, starred review

* "The impossible choices each character faces compel readers to consider the fission when ethics slam into power, creating a chain reaction of pain and grim, uncertain outcomes that must be worked through even if chances for hope on the other side are slim. Of course, [readers will be left] in breathless anticipation for the next installment, but the intensity of this middle piece is a satisfying feast all on its own."—BCCB, starred review

"The next Next Big Thing."—Wired

"It is written masterfully and filled with poetic lyricism that tricks you into believing you are reading a classic. The book is melancholy and the pain of the characters is so etched into the pages that after you put the book down you find yourself hovering in dark corners, muttering to yourself about the cruelty of the world. But don't let that put you off from reading what will become a classic in literature in the decades to come, for sure. I am eagerly awaiting book three. Mrs Taylor! Bring it on!"—Fantasy Book Review