The Devil's Harvest: A Ruthless Killer, a Terrorized Community, and the Search for Justice in California's Central Valley (Paperback) 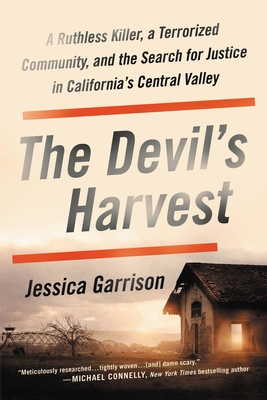 The Devil's Harvest: A Ruthless Killer, a Terrorized Community, and the Search for Justice in California's Central Valley (Paperback)

This suspenseful true story of a drug cartel hitman who got away with murder after murder in California's Central Valley over three decades reveals how the criminal justice system fails our most vulnerable immigrant communities.

On the surface, fifty-eight-year-old Jose Martinez didn't seem evil or even that remarkable—just a regular neighbor, good with cars and devoted to his family. But in between taking his children to Disneyland and visiting his mom, Martinez was also one of the most skilled professional killers police had ever seen.

He tracked one victim to one of the wealthiest corners of America, a horse ranch in Santa Barbara, and shot him dead in the morning sunlight, setting off a decades-long manhunt. He shot another man, a farmworker, right in front of his young wife as they drove to work in the fields. The widow would wait decades for justice. Those were murders for hire. Others he killed for vengeance.

How did Martinez manage to evade law enforcement for so long with little more than a slap on the wrist? Because he understood a dark truth about the criminal justice system: if you kill the "right people"—people who are poor, who aren't white, and who don't have anyone to speak up for them—you can get away with it.

Melding the pacing and suspense of a true crime thriller with the rigor of top-notch investigative journalism, The Devil's Harvest follows award-winning reporter Jessica Garrison's relentless search for the truth as she traces the life of this assassin, the cops who were always a few steps behind him, and the families of his many victims. Drawing upon decades of case files, interrogation transcripts, on-the-ground reporting, and Martinez's chilling handwritten journals, The Devil's Harvest uses a gripping and often shocking narrative to dig into one of the most important moral questions haunting our politically divided nation today: Why do some deaths—and some lives—matter more than others?

"Meticulously researched and tightly woven, The Devil's Harvest is an important story because it tells us that if [this] can happen in one place, then it can happen in any place. And that's damn scary." —Michael Connelly, New York Times bestselling author of The Closers, The Lincoln Lawyer, and The Night Fire

Jessica Garrison is an investigations editor for BuzzFeed News and spent more than a decade as a reporter at the Los Angeles Times.
"Jessica Garrison is a
writer to watch. Her ease with language and graceful storytelling make her a welcome
new voice on the California literary scene. This book sheds light on the
neglected history of American homicide and weak justice as it plays out in
migrant farmworker communities and on the distinct challenges of rural
policing, which are too often overlooked in the national conversation on
violent crime."—JillLeovy, New York Times bestselling author of Ghettoside

"A killer who hides in plain sight, a justice system that fails its most vulnerable--with her deep dive into the life and many deaths of Jose Martinez, Jessica Garrison has tapped into a story that is as haunting as it is captivating. Meticulously researched and tightly woven, The Devil's Harvest is an important story because it tells us that if it can happen in one place, then it can happen in any place. And that's damn scary."—Michael Connelly, New York Times bestselling author of The Closers, The Lincoln Lawyer, and The Night Fire

"The most enduring crime narratives zoom out past individual stories of senseless murder to larger issues of societal breakdown, cruel injustice, and ripple effects upon countless lives forever fractured. The Devil's Harvest brilliantly depicts not only the crimes of one decades-undetected hitman, but the lives of those he murdered--often poor, undocumented immigrants, overlooked and given little thought. Jessica Garrison demonstrates, with urgency and compassion, how necessary it is that we not look away and how much these lives count above all."—SarahWeinman ("The Crime Lady"), author of The Real Lolita and editor of Unspeakable Acts:True Tales of Crime, Murder, Deceit & Obsession

"Such a rich evocation of place is a rare find in a book about a killer and his crimes. The middle of California becomes another character, as richly drawn as the cunning murderer, the dedicated but often hapless detectives who chased him, and the people--poor and hardworking--trying to seek justice."—MarkArax, award-winning journalist and author of The Dreamt Land: Chasing Waterand Dust Across California

"[A] propulsive and incisive look at a hired killer who targeted those on the margins--often poor, undocumented immigrants living in the Central Valley--told with necessary compassion."—The Crime Lady blog

"With great empathy and exhaustive research, Jessica Garrison weaves a compelling tale that is equal parts detective story and social commentary. The Devil's Harvest is a different and much-needed California story--trenchant and timely in an era of staggering inequality."—MiriamPawel, author of The Browns of California

"Expertly researched... In a time of great frustration with law enforcement's role in the racial divide in America, Garrison's work shows another aspect of the social disparity in policing, namely that crimes against minorities are poorly investigated. This is essential reading for true crime buffs."—Publishers Weekly

"Garrison's writing is enthrallingly thriller-esque while it sheds light
on real-world horrors."—Shelf Awareness

"Meticulously researched... a portrait of a place as much as it's a true-crime narrative."—The Los Angeles Times, California Newsletter

"This is a powerfully addictive read from start to finish, and a first-class true-crime narrative."—Booklist