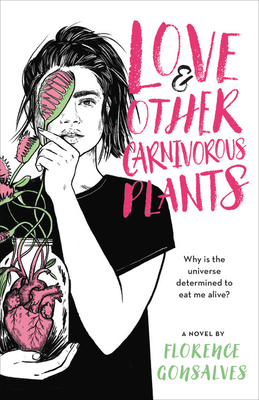 
Available to Order - Usually Arrives in Our Store in 4 to 7 Days
This acclaimed, darkly funny debut for fans of Jesse Andrews and Robyn Schneider about a teen who's consumed by love, grief, and self-destructive behavior is now in paperback.

Freshman year at college was the most anticlimactic year of Danny's life. She's failing pre-med and drifting apart from her best friend. One by one, Danny is losing all the underpinnings of her identity. When she finds herself attracted to an older, edgy girl who she met in rehab for an eating disorder, she finally feels like she might be finding a new sense of self. But when tragedy strikes, her self-destructive tendencies come back to haunt her as she struggles to discover who that self really is. With a starkly memorable voice that's at turns hilarious and heartbreaking, Love and Other Carnivorous Plants brilliantly captures the painful turning point between an adolescence that's slipping away and the overwhelming uncertainty of the future.
Florence Gonsalves graduated from Dartmouth College in 2015, and after numerous jobs and internships, she finally decided to pursue her lifelong dream of becoming an author. Love & Other Carnivorous Plants was her debut novel, and she is also the author of Dear Universe. She invites you to visit her online at florencegonsalves.com.
Booklist Editors' Choice: Books for Youth 2018
A 2019 Rainbow Book List Selection


*"A pitch-perfect take on what happens when the future you imagined doesn't live up to expectations.... This genuinely funny novel about some harrowing topics manages to balance humor and pathos perfectly. Readers who connected with J.J. Johnson's Believarexic or Sam J. Miller's The Art of Starving will want this book, as well as the many John Green fans who crave intelligent stories that occupy both shadow and light."
—Booklist, starred review

"Fans of Sarah Dessen will appreciate Danny's relatable and realistic journey. A must-have sharp, powerful, and witty immersion into the complexities of sexual identity and mental health."—School Library Journal

"Gonsalves realistically conveys Danny's wide range of emotions.... Her most profound realization comes through accepting that she can live her life on her own terms and that she need not have it all figured out quite yet."—Publishers Weekly

"Self-deprecating, witty.... As funny as it is painful."
—VOYA

"A hilarious, thoughtful novel of trying to figure out loving other people when it hurts, and loving yourself when it's impossible."—Teenreads.com

"Will appeal to students who deal with anxiety and the pressures of life that many teens face."—School Library Connection