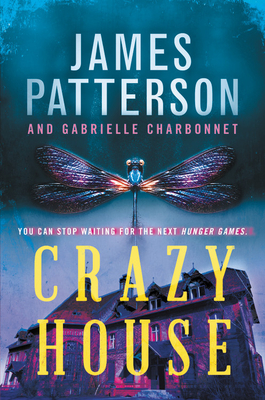 Two twins face a world of Death Row and dystopia in James Patterson's gripping thriller-perfect for fans of The Hunger Games.
Seventeen-year-old Becca Greenfield was snatched from her small hometown. She was thrown into a maximum-security prison and put on Death Row with other kids her age. Until her execution, Becca's told to fit in and shut her mouth . . . but Becca's never been very good at either. Her sister Cassie was always the good twin.
There were no charges. There was no trial. There will be no escape. Becca's only hope is that her twin sister will find her. That perfect little priss Cassie will stop following the rules and start breaking them, before it's too late. Because her jailers made a mistake that could get them both killed: They took the wrong twin.
Crazy House is a non-stop thrill ride from James Patterson, the #1 bestselling author of Maximum Ride, Witch and Wizard, and Confessions of a Murder Suspect.
James Patterson received the Literarian Award for Outstanding Service to the American Literary Community at the 2015 National Book Awards. He holds the Guinness World Record for the most #1 New York Times bestsellers, including Confessions of a Murder Suspect and the Maximum Ride series, and his books have sold more than 350 million copies worldwide. A tireless champion of the power of books and reading, Patterson created a children's book imprint, JIMMY Patterson, whose mission is simple: "We want every kid who finishes a JIMMY Book to say, 'PLEASE GIVE ME ANOTHER BOOK.'" He has donated more than one million books to students and soldiers and funds over four hundred Teacher Education Scholarships at twenty-four colleges and universities. He has also donated millions to independent bookstores and school libraries. Patterson investing proceeds from the sales of JIMMY Patterson Books in pro-reading initiatives.

"Action-packed fight scenes, flickers of romance, and Patterson's signature speedy chapters should satisfy teens who like their suspense served with a side of political revolt."—Booklist

"A welcome reveal sets the story in a promising direction for future volumes. This title will be in high demand among fans of suspense and thrillers."—School Library Journal