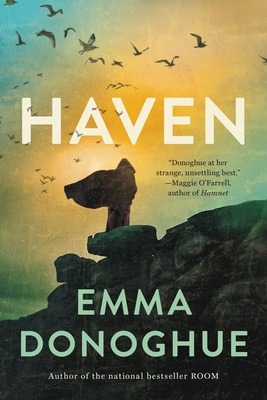 In this beautiful story of adventure and survival from the New York Times bestselling author of Room, three men vow to leave the world behind them as they set out in a small boat for an island their leader has seen in a dream, with only faith to guide them.

In seventh-century Ireland, a scholar and priest called Artt has a dream telling him to leave the sinful world behind. Taking two monks—young Trian and old Cormac—he rows down the river Shannon in search of an isolated spot on which to found a monastery. Drifting out into the Atlantic, the three men find an impossibly steep, bare rock inhabited by tens of thousands of birds, and claim it for God. In such a place, what will survival mean?

Born in Dublin in 1969, and now living in Canada, Emma Donoghue writes fiction (novels and short stories, contemporary and historical, most recently The Pull of the Stars), as well as drama for screen and stage. Room, was a New York Times Best Book of 2010 and a finalist for the Man Booker, Commonwealth, and Orange Prizes, selling between two and three million copies in forty languages. Donoghue was nominated for an Academy Award for her 2015 adaptation starring Brie Larson. She co-wrote the screenplay for the film of her 2016 novel The Wonder, starring Florence Pugh, coming from Netflix. For more information, visit www.emmadonoghue.com.


"This book kept me up half the night—I was unable to put it down, and read it in one spellbound gulp. It is everything a novel should be: compassionate, unpredictable, and questioning. Haven is Donoghue at her strange, unsettling best."—Maggie O’Farrell, author of Hamnet

"HAVEN creates an eerie, meditative atmosphere that should resonate with anyone willing to think deeply about the blessings and costs of devoting one’s life to a transcendent cause…Donoghue works subtly in the margins, letting these three men evolve into their distinct roles. Their foolish destruction of the island’s resources will resonate with contemporary readers, but she refuses to reduce these characters to symbols of modern exigencies…The effect is transporting, sometimes unsettling and eventually shocking.” —Ron Charles, The Washington Post

“Told with the clarity of a fable, Haven transports us into territories unknown, where ‘fog makes an island of every man.’ Donoghue’s men of the cloth confront challenges that rattle not only their faith in God, but their faith in each other and in the natural world. This is a patient, thoughtful novel with much to say about spirituality, hope, and human failure, and about the miracle of mercy.”—Esi Edugyan, Giller Prize-winning author of Washington Black

"What a beautiful, intense, blazing, richly-woven yet spartan and unsparing book this is. I couldn’t put it down. Lyrical and then visceral, appearing at one moment tranquil and another so intense it’s like being bitten and clawed... It is both a story about three men of God surviving with almost nothing on an island, and another about dictatorship, isolation, true fraternity, love, the nature of faith and man’s place in the natural world."—Rachel Joyce, author of The Unlikely Pilgrimage of Harold Fry

“Haven is a beautiful and timely novel about isolation, passion and the conflict between obedience and self-preservation. The island setting and the characters stayed with me long after I finished reading.”—Sarah Moss, author of Summerwater

“In this novel of religious discovery, set in the seventh century, three Irish monks make a fraught journey from their monastery to Great Skellig, a craggy rock formation in the Atlantic that resembles ‘the most gigantic of cathedrals.’ Switching perspectives among the monks, the narrative tracks their escalating discord as they endeavor to construct a new monastic settlement there. Donoghue evokes their devotional seriousness with a descriptive texture that is equally alert to a flock of cormorants taking flight ‘by some collusion,’ or to the whittling of a makeshift pipe. As the men maintain routines of worship in the face of futility, the novel asks whether they should be answerable to God or to one another.”—The New Yorker, "Briefly Noted"

"Donoghue's readers and all lovers of thought-provoking literary fiction will be looking for this quietly dramatic tale."—Sara Johnson, Booklist

"“Deliciously claustrophobic…Donoghue (The Wonder; Frog Music) excels at creating isolated atmospheres and examining the dynamic of small casts of characters--as in Room or The Pull of the Stars…Haven may be just one letter away from heaven, but this island community looks less like either and more like a prison as time goes on. A powerful study of religious obsession and confinement, this is one for readers of Matrix and To Paradise. Shelf Talker: Emma Donoghue’s 12th novel is an intense character study of three seventh-century monks who found a monastery on a remote Irish island.”—Shelf Awareness

"Bestselling author Donoghue returns with historical fiction about three monks who travel to a remote island—whose presence came to their leader in a dream—off the coast of Ireland...This is a patient, thoughtful novel with much to say about spirituality, hope, and human failure, and about the miracle of mercy."—Esi Edugyan, The Millions

“A 7th-century ‘Room’…Donoghue wrings plenty of narrative sustenance from her barren landscape… In the drama that unfolds here [she] returns to the radical minimalism of 2010’s ‘Room’. Indeed, the two works share striking formal similarities: two characters struggle to preserve their humanity in utter isolation while appeasing an implacable captor… This is a miniature created with a muted palette, somber in aspect but crowded with quietly beautiful details. And its subject, of course, is a universal one: we’re all stuck on this rock, trying to keep hold of simple moral truths while quietly losing our minds. As poor young Trian puts it, in one of his darkest moments: ‘Even this unbearable life is still sweet.’” —Paraic O’Donnell, The Guardian

"Each new book by Room author Emma Donoghue is cause for celebration. Her latest, Haven, takes place in 7th century Ireland. It’s there that a charismatic leader sets out with two other men to start a novel version of life according to God. Their new home? A remote island whose only population is thousands of birds. Today we know this true-to-life island as Skellig Michael, but it’s through Donoghue’s signature style that the past comes alive.”—BookRiot

"A surprisingly compelling and suspenseful adventure…a marvel of detailed, intimate storytelling…In fact, this short novel is really a parable about the narcissism of the religious fanatic, and the contrasting endurance of human communities. The three monks represent the conflicting religious imperatives of faith versus works in the most vivid way possible, although there’s no doubt which side we’re meant to sympathize with more. The austere beauties of Skellig Michael make the island itself a fourth character, earning this book a place among classics of ecological fiction."—Kristen McDermott, Historical Novel Society

"[Haven’s] setting proves to be as stark and claustrophobic as that of her celebrated ‘Room’…Donoghue excels in creating not just a world but a worldview that is far removed from our own…a bold, thoughtful novel, whose austerity matches its setting.” —Financial Times

"Taking one of her regular breaks from contemporary fiction, Donoghue has left behind none of her ability to spin a compelling story and people it with sharp characterizations....Generating narrative tension from a minimum of action, Donoghue brings the monks’ conflicts to a climax when Trian falls ill and a long-kept secret is revealed. Artt’s bigoted response provokes a confrontation that brings the novel to a satisfying conclusion. Reminiscent of Room (2010) in its portrayal of fraught interactions in a confined space, this medieval excursion lacks its bestselling predecessor’s broad appeal, but the author’s more adventurous fans will appreciate her skilled handling of challenging material.
More fine work from the talented Donoghue."—Kirkus Reviews

"Twenty-first century living got you down? Wish you could disappear, even for a few hours, into an older, simpler, purer way of life? Well, it doesn’t get much purer than an extraordinarily inhospitable island off the west coast of Ireland, inhabited only by a massive colony of puffins and three severely under-resourced seventh century monks. In this brilliantly realized, utterly transporting new novel by Irish-Canadian author Emma Donoghue (Room, The Wonder), a pious traveling scholar-priest called Artt has a dream telling him to seek out a far-flung island, cut off from the sin and sloth of the modern world, on which to build a monastery...Donoghue’s detailing of the island’s rugged geography and the methodical subsistence work of its dogged new stewards is masterful, almost hypnotic, but it’s the author’s quietly devastating depiction of the conflict between faith and survival, obedience and self-preservation, that powers this extraordinary novel."—LitHub, "Most Anticipated Books of 2022"

"Donoghue's characterizations of the three men, her vivid imagining of the measures they must take to survive, and her beautiful descriptions of the landscape and wildlife — puffins galore — make this book readable even for those who don't care much about medieval Christianity. A strange turn of events having to do with Trian's secret brings the book to its climax. Donoghue is good at endings, as readers of ‘Room’ know, and here again she metes out narrative justice with a firm hand." —Marion Winik, Minneapolis Star Tribune

"Inspired by the true history of an early Christian monastery founded on Ireland’s Skellig Islands, Haven explores the mix of superstition, lore, faith and basic need that accompanies humanity on a mission. As in her hit bestseller, Room, Donoghue’s powers of description expand small, confined spaces until they contain worlds of universal depth…Thoughtful and thought-provoking, Haven captures the gulf that can grow—especially during times of hardship—between what we say we believe and how we live."—Book Page

"Donoghue magically transports us to seventh-century Ireland, placing us with these very human pilgrims, for whom life is a mystery and every victory—from making a fire to growing food—is hard won. Haven is a stunning book, an adventure that draws us into the human heart."—Apple Reviews

"This is a powerful read with careful attention paid to balancing natural and historical detail with a broader exploration of faith, madness, survival, and what it means to be human."—Brooklyn Rail

"Donoghue's (The Pull of the Stars, 2020) prose glimmers with images of the pristine natural world, including many varieties of sea birds, but as Artt’s sanctimonious piety increasingly challenges common sense, Cormac and Trian wonder if their vows of obedience will doom them. As always, Donoghue extracts realistic emotions from characters interacting within close quarters and delicately explores the demands of faith. This evocative historical novel also works as a cautionary tale about the dangers of religious control...Donoghue's readers and all lovers of thought-provoking literary fiction will be looking for this quietly dramatic tale."—Booklist