An Orchestra of Minorities (Paperback) 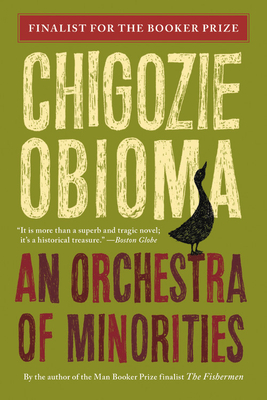 By Chigozie Obioma
$16.99
On Our Shelves Now

A gorgeously literary love story and an enchanting reimagining of The Odyssey both, set in modern-day Nigeria. For anyone who enjoys Chimamanda Ngozi Adichie, Jhumpa Lahiri, and/or rich, imaginative, semi-satirical fiction. Obioma's debut was shortlisted for the Man Booker in 2015, and this book, his sophomore effort, is a far cry from any "slump"!

A heartbreaking story about a Nigerian poultry farmer who sacrifices everything to win the woman he loves, by Man Booker Finalist and author of The Fishermen, Chigozie Obioma.

"It is more than a superb and tragic novel; it's a historical treasure."-Boston Globe

Set on the outskirts of Umuahia, Nigeria and narrated by a chi, or guardian spirit, An Orchestra of Minorities tells the story of Chinonso, a young poultry farmer whose soul is ignited when he sees a woman attempting to jump from a highway bridge. Horrified by her recklessness, Chinonso joins her on the roadside and hurls two of his prized chickens into the water below to express the severity of such a fall. The woman, Ndali, is stopped her in her tracks.

Bonded by this night on the bridge, Chinonso and Ndali fall in love. But Ndali is from a wealthy family and struggles to imagine a future near a chicken coop. When her family objects to the union because he is uneducated, Chinonso sells most of his possessions to attend a college in Cyprus. But when he arrives he discovers there is no place at the school for him, and that he has been utterly duped by the young Nigerian who has made the arrangements... Penniless, homeless, and furious at a world which continues to relegate him to the sidelines, Chinonso gets further away from his dream, from Ndali and the farm he called home.

Spanning continents, traversing the earth and cosmic spaces, and told by a narrator who has lived for hundreds of years, the novel is a contemporary twist of Homer's Odyssey. Written in the mythic style of the Igbo literary tradition, Chigozie Obioma weaves a heart-wrenching epic about destiny and determination.

Chigozie Obioma was born in Akure, Nigeria. His debut novel, The Fishermen, is winner of the inaugural FT/Oppenheimer Award for Fiction, the NAACP Image Awards for Debut Literary Work, and the Art Seidenbaum Award for First Fiction (Los Angeles Times Book Prizes); and was a finalist for the Man Booker Prize 2015, as well as for several other prizes in the US and UK.

Obioma was named one of Foreign Policy's 100 Leading Global Thinkers of 2015. His work has been translated into more than 25 languages and adapted into stage. He is an assistant professor of Literature and Creative Writing at the University of Nebraska-Lincoln. His second novel, An Orchestra of Minorities, was a finalist for the 2019 Booker Prize.

"This is a book that wrenches the heart with its story of love, migration and inner turmoil, told with remarkable language from start to finish. Narrated by a cast of characters from Igbo spiritual tradition, the story of Chinonso, the chicken farmer begins and ends with tragedy. But his quest for a life with Ndali, the woman he loves, drives him to seek status and wealth as an African migrant in Europe, to transcend Nigeria's formidable class boundaries. The spirits look down on these human dramas of small town Nigeria and reveal the rich complexity of another realm along the way. Obioma's is a tale of Odyssian proportions that makes the heart soar, and a crucial journey into a heartache that is both mythical and real. A stunning book."
—Booker Prize 2019 Jury citation

"Gorgeously written, with a twist of magical realism and a heavy dose of sad reality."—Washington Post

"Transcendent . . . Chigozie Obioma's second novel is a rare treasure: a book that deepens the mystery of the human experience."—Seattle Times

"Igbo and Greek mythology are braided into this heartbreaking and utterly unique novel"—Boris Kacka, Vulture

"Obioma's frenetically assured second novel is a spectacular artistic leap forwards . . . [it is] a linguistically flamboyant, fast-moving, fatalistic saga of one man's personal disaster . . . Few contemporary novels achieve the seductive panache of Obioma's heightened language, with its mixture of English, Igbo and colourful African-English phrases, and the startling clarity of the dialogue. The story is extreme; yet its theme is a bid for mercy for that most fragile of creatures - a human" —Eileen Battersby, Guardian

"A mystical epic...confirms his place among a raft of literary stars." —Time

"Obioma writes with an exigent precision that makes AN ORCHESTRA OF MINORITIES feel at once timely and speculative. The novel aches with Chinonso. His triumphs are rare and hard-won. Obioma compels the reader to root for him, to see the poor chicken farmer's story as an epic."
—The Atlantic

"It is more than a superb and tragic novel; it's a historical treasure."
—Boston Globe

"It's a story as old as the epic."
—New York Times Book Review

"The chances that Chigozie Obioma's second novel would match, let alone surpass, "The Fishermen," were slim. Happily, his follow-up, AN ORCHESTRA OF MINORITIES, is a triumph. . . . In an era of copycats, "An Orchestra of Minorities" is an unusual and brilliantly original book."
—The Economist

"His is a bracing and searing work that compresses an ordinary life into an epic journey."
—Houston Chronicle

"A tale of mythic nature and epic scale at times recalling Homer's Odyssey-a sweeping story about destiny and the power of choice."—Vanity Fair

"A multicultural fable that her­alds a new master of magical realism. . . . It's a special writer who can take the familiar tropes found within AN ORCHESTRA OF MINORITIESand infuse them with new life, transforming them into something exciting and unexpected. Happily, Obioma is exactly such an author."—Bookpage, starred review

A deeply original book that will have readers laughing at, angry with, and feeling compassion for a determined hero who endeavors to create his own destiny.
—Kirkus, starred review

"Obioma overwhelms readers with a visceral sense of Chinonso's humanity, his love, his rage, and his despair as he struggles between fate and self-determination."—Library Journal, starred review

"epically imaginative, heartbreaking, and worth the read."
—Los Angeles Review of Books

"a passionate argument for the enduring vitality of indigenous culture."
—New Yorker

"This is a powerful, multifarious novel that underlines Obioma's status as one of the most exciting voices in modern African literature."
—Financial Times

"An ambitious and immersive tale about love and sacrifice, told by an ancient spirit. A bold new novel from an exciting young writer."
—Brit Bennett, New York Times bestselling author of The Mothers

"Chigozie Obioma is a gifted and original storyteller. His masterful new novel An Orchestra of Minorities is remarkable for its exploration of universal concepts to do with destiny, free will and luck."—Jennifer Clement, author of Gun Love and President of PEN International

"Chigozie Obioma is an audacious and ambitious writer, and quite adept at binding the reader to the irresistible spells he casts. An Orchestra of Minorities is a magisterial accomplishment by any measure, and particularly impressive for the way Obioma orchestrates a tableau in which humans and spirits must interact in a complex, emotionally rich-veined story. Few writers can match Obioma's astonishing range, his deft facility for weaving a mesmeric and triumphant fictive canvas in which-reminiscent of the ancient masters-a cohort of gods presides over and negotiates the fates of humans."—Okey Ndibe, author of Foreign Gods, Inc.

"Chigozie Obioma pens a deeply empathetic, complex, and gut-wrenchingly human narrative that captures the heart and soul. An Orchestra of Minorities stays with you. With remarkable style and compelling language, he explores what it means to experience blinding love and devastating loss. A truly gifted writer, Obioma has proven yet again, that he's a literary treasure."—Nicole Dennis-Benn, award-winning author of Here Comes the Sun