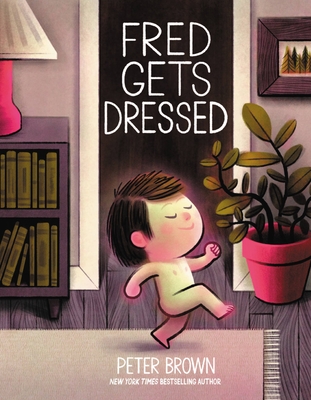 From a New York Times bestselling author and Caldecott-honor winning artist comes an exuberant illustrated story about playing dress up, having fun, and feeling free.

The boy loves to be naked. He romps around his house naked and wild and free. Until he romps into his parents' closet and is inspired to get dressed. First he tries on his dad's clothes, but they don't fit well. Then he tries on his mom's clothes, and wow! The boy looks great. He looks through his mom's jewelry and makeup and tries that on, too. When he's discovered by his mother and father, the whole family (including the dog!) get in on the fun, and they all get dressed together.

This charming and humorous story was inspired by bestselling and award-winning author Peter Brown's own childhood, and highlights nontraditional gender roles and self-expression.
Peter Brown is the author and illustrator of many bestselling children's books, including Children Make Terrible Pets, Mr. Tiger Goes Wild, and The Curious Garden. He is also the author of the bestselling middle-grade duology The Wild Robot and The Wild Robot Escapes. He is the recipient of a Caldecott Honor for Creepy Carrots!, two E.B. White Read Aloud Awards, a New York Times Best Illustrated Children's Book award, and a Children's Choice Award for Illustrator of the Year. Peter's website is www.peterbrownstudio.com.

*"This is a book made for storytime, with its bold mixed-media illustrations that work almost like a storyboard moving left to right... The happy ending, almost a reverse of Where the Wild Things Are, includes everyone discovering the fun of being at least a little bit wild."—The Horn Book, starred review

*"There's a lot to go wild for in this picture-book celebration of individuality and self-expression... Hooray for Mr. Tiger and his wild ways."—Kirkus, starred review

*"Readers who prefer the view from underneath the dinner table will find a kindred soul in Brown's brightly burning character who knows that the wilderness is always waiting, should the need arise."—Publishers Weekly, starred review

*"This 'it's okay to be different' story stands out from other picture books on the topic thanks to Brown's delightfully clever illustrations and masterful compositions...Sure to be an instant read-aloud classic in classrooms and libraries."—School Library Journal, starred review

*"With its skewed humor and untamed spirit this joyous exploration of quasi-reverse anthropomorphism will delight listeners again and again."—Booklist, starred review

Praise for My Teacher is a Monster:*"This playful, eye-catching story goes a long way to humanize both teachers and students."—Booklist, starred review

* "Here's hoping readers who are similarly challenged in the behavior department will get both messages: Teachers are people, and they give back what they get."—Kirkus Reviews, starred review

"[A] story that students and teachers will enjoy equally."—The Horn Book

"A quietly marvelous picture book... Echoing the themes of The Secret Garden, it is an ecological fable, a whimsical tale celebrating perseverance and creativity."—New York Times

* "A quiet but stirring fable of urban renewal, sure to capture imaginations."—Publishers Weekly, starred review

* "The art is spectacular and the book might inspire children to engage in small projects to improve their own neighborhoods."—School Library Journal, starred review