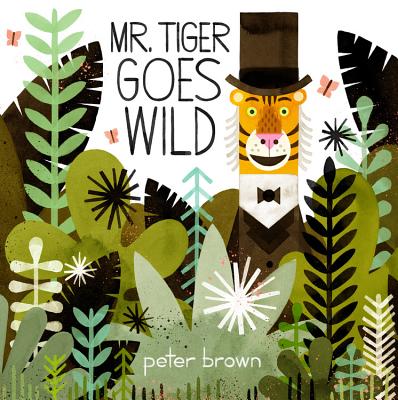 
On Our Shelves Now
Are you bored with being so proper?
Do you want to have more fun?
Mr. Tiger knows exactly how you feel. So he decides to go wild.
But does he go too far?
From Caldecott Honor artist Peter Brown comes a story that shows there's a time and place for everything...even going wild.
Peter Brown is the author and illustrator of many bestselling children's books, including Children Make Terrible Pets, A Creepy Pair of Underwear, The Curious Garden, and The Wild Robot. He is the recipient of a Caldecott Honor for Creepy Carrots!, two E.B. White Read Aloud Awards, a New York Times Best Illustrated Children's Book award, and a Children's Choice Award for Illustrator of the Year. Peter's website is www.peterbrownstudio.com.
New York Times BestsellerAmazon Best Children's Book of 2013ALSC Notable Children's BookPublishers Weekly Best Book of the YearSchool Library Journal Best Book of the YearA Horn Book FanfareBooklist Editors' ChoiceKirkus Best Children's Book of the YearBoston Globe-Horn Book Awards Picture Book Winner

*"This is a book made for storytime, with its bold mixed-media illustrations that work almost like a storyboard moving left to right...The happy ending, almost a reverse of Where the Wild Things Are, includes everyone discovering the fun of being at least a little bit wild."—The Horn Book, starred review

*"There's a lot to go wild for in this picture-book celebration of individuality and self-expression...Hooray for Mr. Tiger and his wild ways."—Kirkus, starred review

*"Readers who prefer the view from underneath the dinner table will find a kindred soul in Brown's brightly burning character who knows that the wilderness is always waiting, should the need arise."—Publishers Weekly, starred review

*"This "it's okay to be different" story stands out from other picture books on the topic thanks to Brown's delightfully clever illustrations and masterful compositions...Sure to be an instant read-aloud classic in classrooms and libraries."—School Library Journal, starred review

*"With its skewed humor and untamed spirit this joyous exploration of quasi-reverse anthropomorphism will delight listeners again and again."—Booklist, starred review