Tell Them We Remember: The Story of the Holocaust (Paperback) 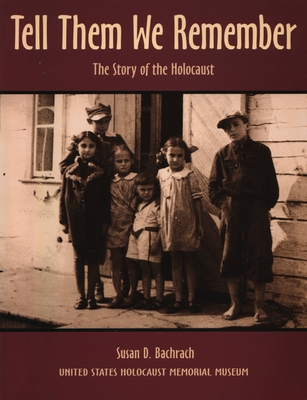 Tell Them We Remember: The Story of the Holocaust (Paperback)


Available to Order - Usually Arrives in Our Store in 4 to 7 Days
A vital, award-winning introduction to the Holocaust, with photos and documents from the United States Holocaust Memorial Museum

Drawing on the United States Holocaust Memorial Museum's large collection of artifacts, photographs, maps, and taped oral and video histories, this book tells the story of the Holocaust and how it affected the daily lives of innocent people throughout Europe. Excerpts from 'identity cards' that are part of the Museum's exhibit focus on specific young people whose worlds were turned upside down when they became trapped under Nazi rule. Many of these young people never had the chance to grow up. One and a half million of the victims were children and teenagers--the great majority of them Jewish children but also tens of thousands of Roma (Gypsy) children, disabled children, and Polish Catholic children. Like their parents, they were singled out not for anything they had done, but simply because the Nazis considered them inferior.

Those who survived to become adults passed on the stories of relatives and friends who had been killed, with the hope that the terrible crimes of the Holocaust would never be forgotten or repeated. The powerful stories and images in this book are presented with the same hope. Only by learning about the Holocaust will we be able to tell the victims we remember.

Susan D. Bachrach is a staff historian in the Exhibitions Department at the United States Holocaust Memorial Museum. She received her Ph.D. in modern European history from the University of Wisconsin-Madison. She lives with her husband and their two children in Washington, D.C.

"To most children-indeed to most adults-the word Holocaust is about something that happened a long time ago in a place far away. The stuff of folk tales and horror stories. Tell Them We Remember helps to put faces to that word. If we don't remember well enough, we repeat history. This book helps us to truly remember." --Jane Yolen, author of The Devil's Arithmetic


"Tell Them We Remember should be read by every schoolchild in America and studied in every public school. If we are not to relive history's recurring holocaust, we must learn its lessons." --Harry Mazer, author of The Last Mission


"This ambitious work, produced in association with the United States Holocaust Memorial Museum, is the book equivalent of a museum tour....there is much to compel thought" --Publishers Weekly