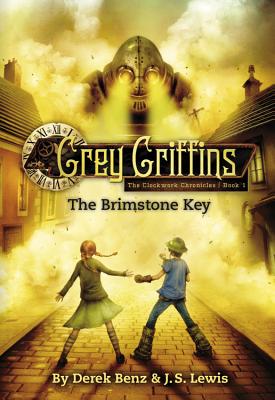 A year ago, the Grey Griffins were just regular kids from Avalon, Minnesota. That was before they learned about the existence of evil fairies, werewolves, and other things that go bump in the night. Now they are monster-hunters, celebrated heroes, and allies to the legendary Templar knights---but even heroes have to go to school. When the Griffins enroll at Iron Bridge Academy, a school to train young recruits in the fight against the forces of evil, they find themselves at the center of a whole new adventure. The Clockwork King, a Templar foe from days past, has returned to finish the plan he set in motion decades ago. A plot to steal the souls of changelings---humans infused with fairy blood and supernatural abilities---in order to power his army of clockwork war machines. In The Brimstone Key, authors Derek Benz and J.S. Lewis deftly blend the mystical wonder of steampunk with magic and adventure to create an action-packed thrill ride.

Derek Benz and J.S. Lewis have been best friends since they could remember. They grew up sharing birthday parties, Saturday morning cartoons, comic books and baseball cards, and spent much of their childhood exploring the sprawling woodlands behind Derek's family farm, which they secretly suspected was enchanted. They are the authors of three previous books featuring The Grey Griffins: The Revenge of the Shadow King, The Rise of the Black Wolf and The Fall of the Templar.

Derek Benz currently lives with his wife and son in New Jersey.

J.S. Lewis lives with his wife and daughters in Arizona.