How We Fight: Crusades, Quagmires, and the American Way of War (Hardcover) 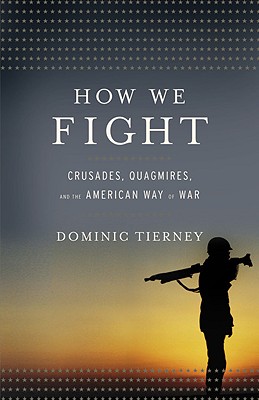 How We Fight: Crusades, Quagmires, and the American Way of War (Hardcover)


Available to Order - Usually Arrives in Our Store in 4 to 7 Days
Americans love war. We've never run from a fight. Our triumphs from the American Revolution to World War II define who we are as a nation and a people.

Americans hate war. Our leaders rush us into conflicts without knowing the facts or understanding the consequences. Korea, Vietnam, and now Iraq and Afghanistan define who we are as a nation and a people.

How We Fight explores the extraordinary doublemindedness with which Americans approach war, and reveals the opposing mindsets that have governed our responses throughout history: the "crusade" tradition-our grand quests to defend democratic values and overthrow tyrants; and the "quagmire" tradition-our resistance to the work of nation-building and its inevitable cost in dollars and American lives.

How can one nation be so split? Studying conflicts from the Civil War to the present, Dominic Tierney has created a secret history of American foreign policy and a frank and insightful look at how Americans respond to the ultimate challenge. And he shows how success is possible. His innovative model for tackling the challenges of modern war can mean longstanding victory in Iraq and Afghanistan, by rediscovering a lost American warrior tradition.
Dominic Tierney is an associate professor of political science at Swarthmore College and holds a Ph.D. in International Relations from Oxford University. He is a senior fellow at the Foreign Policy Research Institute, a former visiting associate professor at Princeton University, a former research fellow at Harvard University, and the author of three books, including How We Fight and Failing to Win, which won the International Studies Association "Best Book of the Year" Award and was nominated for its "Best Book of the Decade" Award.

Praise for HOW WE FIGHT:

"Lucid and entertaining...A provocative analysis of why Americans love some wars and hate others."—Kirkus Reviews

"A great theme, beautifully written and compellingly organized, it's a fitting update to Russell Weigley's classic [The American Way of War] and an important contribution to a national debate over the war in Afghanistan which is only gathering steam."—Ambassador James Dobbins, former Assistant Secretary of State for Europe, and currently Director of the International Security and Defense Policy Center at RAND

"Writing in colloquial style, this college professor accessibly frames questions arising from Iraq and Afghanistan about why victories have often been followed by occupations."—Gilbert Taylor , Booklist

"Dominic Tierney's How We Fight: Crusades, Quagmires, and the American Way of War is an unusual achievement. It is a provocative scholarly book about the U.S. approach to war that was written for a broad non-academic audience...no one can dispute that his ambitious undertaking generates much-needed debate on a timely topic. That his writing is fluid and accessible makes it more likely that he will reach both scholarly and policy audiences."—James H. Lebovic, George Washington University

"Tierney's is a welcome voice in the trade press literature on American wars. He captures the essence of America's history of warfare and presents it in a digestible, yet sophisticated and historically rich way...interesting, engaging, compelling, and even entertaining to a broader audience."—Jon Western, Mt. Holyoke College

"How We Fight is an important contribution in itself and for the thinking it prompts in others."—Bruce W. Jentleson, Duke University

"[Tierney's] work here will be a useful addition to the literature of culture and war..."—Library Journal