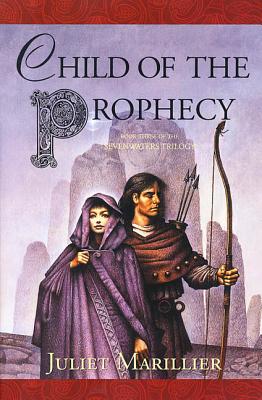 This is book number 3 in the The Sevenwaters Trilogy series.

Child of the Prophecy is the thrilling conclusion to Juliet Marillier's award-winning Sevenwaters Trilogy.

Magic is fading... and the ways of Man are driving the Old Ones to the West, beyond the ken of humankind. The ancient groves are being destroyed, and if nothing is done, Ireland will lose its essential mystic core.

The prophecies of long ago have foretold a way to prevent this horror, and it is the Sevenwaters clan that the spirits of Eire look to for salvation. They are a family bound into the lifeblood of the land, and their promise to preserve the magic has been the cause of great joy to them... as well as great sorrow.

It is up to Fianne, daughter of Niamh, the lost sister of Sevenwaters, to solve the riddles of power. A shy child of a reclusive sorcerer, she finds that her way is hard: She is the granddaughter of the wicked sorceress Oonagh, who has emerged from the shadows and seeks to destroy all that Sevenwaters has striven for. Oonagh will use Fianne most cruelly to accomplish her ends, and stops at nothing to see her will done.

Will Fianne be strong enough to battle this evil and save those she has come to love?

“A rich tapestry of love and loss, family loyalty and personal sacrifice... Marillier's strong voice and rolling, lucid prose seem appropriate for a tenth century Irish tale, and her command of a fantasy story's elements make this an excellent conclusion to a fine trilogy.” —Publishers Weekly (starred review)