If The South Had Won The Civil War (Paperback) 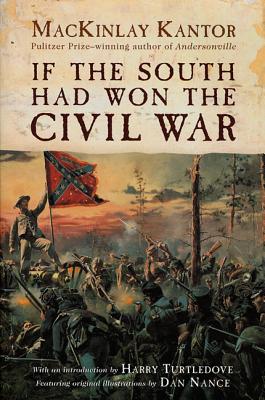 If The South Had Won The Civil War (Paperback)

The Past is a strange place indeed . . . everything could have been so different so easily.
Just a touch here and a tweak there . . . .

MacKinlay Kantor, Pulitzer Price-winning author and master storyteller, shows us how the South could have won the Civil War: how two small shifts in history (as we know it) in the summer of 1863 could have turned the tide for the Confederacy. What would have happened to the Union, to Abraham Lincoln, to the people of the North and South, to the world?

If the South Had Won the Civil War originally appeared in Look magazine nearly half a century ago. It immediately inspired a deluge of letters and telegrams from astonished readers, and became an American Classic overnight. Published in book form soon after, Kantor's masterpiece has been unavailable for a decade. Now, this much requested classic is once again available for a new generation of readers, and features a stunning cover by acclaimed Civil War artist Don Troiani, a new introduction by award-winning alternate history author Harry Turtledove, and fifteen superb illustrations by the incomparable Dan Nance.

It all begins on that fateful afternoon of Tuesday, May 12, 1863, when a deplorable equestrian accident claims the life of General Ulysses S. Grant . . . .

MacKinlay Kantor was born in Webster City, Iowa, on February 4, 1904. In 1934, he published Long Remember, which received numerous rave reviews and became his first bestseller. Ten years later, Kantor was awarded the Pulitzer Prize for his novel Andersonville. He was one of the most well-known American writers during the 1950s and still remains one of the most respected Civil War authors to date. He died on October 11, 1977.

Harry Turtledove (he/him) is an American fantasy and science fiction writer who Publishers Weekly has called the "Master of Alternate History." He has received numerous awards and distinctions, including the Hugo Award for Best Novella, the HOMer Award for Short story, and the John Esthen Cook Award for Southern Fiction. Turtledove’s works include the Crosstime Traffic, Worldwar, Darkness, and Opening of the World series; the standalone novels The House of Daniel, Fort Pillow, and Give Me Back My Legions!; and over a dozen short stories available on Tor.com. He lives in Los Angeles with his wife, novelist Laura Frankos, and their four daughters.

Dan Nance illustrated If The South Had Won The Civil War from Tom Doherty Associates.