Daughter of the Forest (Hardcover) 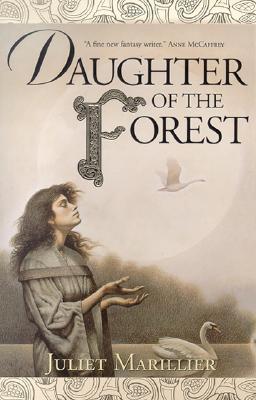 Daughter of the Forest (Hardcover)

Juliet Marillier is a rare talent, a writer who can imbue her characters and her story with such warmth, such heart, that no reader can come away from her work untouched. Daughter of the Forest is a testimony to that talent, a first novel and the beginning of a trilogy like no other: a mixture of history and fantasy, myth and magic, legend and love.

Lord Colum of Sevenwaters is blessed with six sons: Liam, a natural leader; Diarmid, with his passion for adventure; twins Cormack and Conor, each with a different calling; rebellious Finbar, grown old before his time by his gift of the Sight; and the young, compassionate Padriac.

But it is Sorcha, the seventh child and only daughter, who alone is destined to defend her family and protect her land from the Britons and the clan known as Northwoods. For her father has been bewitched, and her brothers bound by a spell that only Sorcha can lift.

To reclaim the lives of her brothers, Sorcha leaves the only safe place she has ever known, and embarks on a journey filled with pain, loss, and terror.

When she is kidnapped by enemy forces and taken to a foreign land, it seems that there will be no way for her to break the spell that condemns all that she loves. But magic knows no boundaries, and Sorcha will have to choose between the life she has always known and a love that comes only once.

Juliet Marillier was born in Dunedin, New Zealand, a town with strong Scottish roots. She currently lives in a rural area of Western Australia, sharing her house with a cat and a dog. A university graduate in music and languages, she has had a varied career that includes working for government agencies, opera singing, and raising four children. Juliet now writes full time. Her lifelong interest in myth, legend, folklore and traditional music is a strong influence on both style and theme in her writing. A passion for early British history, reflecting her Celtic ancestry, is evident in her choice of settings.

Juliet Marillier achieved international recognition in 1999 with the publication of her award-winning novel "Daughter of the Forest." This is the first book of the "Sevenwaters Trilogy," a historical fantasy set in Ireland and Britain in the ninth century, and is loosely based on the traditional fairy tale, "The Six Swans." The second book in the series, "Son of the Shadows," won the 2000 Aurealis Award for best fantasy novel. "Child of the Prophecy" completes this trilogy.

Juliet Marillier's second series is based on the first Viking voyage from Norway to Orkney, and weaves history and folklore into a saga of adventure, romance and magic. The series is made up of two novels, "Wolfskin" and "Foxmask." Juliet is currently working on a new trilogy set in the north of Britain in the time of the Picts.

"I enjoyed it immensely...For an Irish resident, familiar with the mores and customs, Daughter of the Forest has special meaning and relevance. Juliet Marillier is a fine new fantasy writer--and what trials does she put her characters through in the next book?"--Anne McCaffrey

"Ms. Marillier's ability to use so well such a known legend and make it both logical and exciting is an outstanding gift. I am now, of course, eager to see 'what happens next.'"--Andre Norton