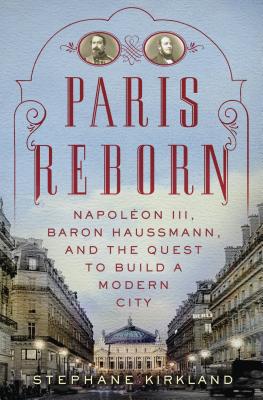 By Stephane Kirkland
Please email or write store for pricing and availability information.
Hard to Find

Stephane Kirkland gives an engrossing account of Napoleon III, Baron Haussmann, and one of the greatest transformations of a major city in modern history

Traditionally known as a dirty, congested, and dangerous city, 19th Century Paris, France was transformed in an extraordinary period from 1848 to 1870, when the government launched a huge campaign to build streets, squares, parks, churches, and public buildings. The Louvre Palace was expanded, Notre-Dame Cathedral was restored and the French masterpiece of the Second Empire, the "Opera Garnier," was built. A very large part of what we see when we visit Paris today originates from this short span of twenty-two years.

The vision for the new Nineteenth Century Paris belonged to Napoleon III, who had led a long and difficult climb to absolute power. But his plans faltered until he brought in a civil servant, Georges-Eugene Haussmann, to take charge of the implementation. Heedless of controversy, at tremendous cost, Haussmann pressed ahead with the giant undertaking until, in 1870, his political enemies brought him down, just months before the collapse of the whole regime brought about the end of an era.

"Paris Reborn" is a must-read for anyone who ever wondered how Paris, the city universally admired as a standard of urban beauty, became what it is.

STEPHANE KIRKLAND holds advanced degrees in architecture and art history and has worked as an architect and as a consultant. He now shares his time between Brooklyn and Paris, writing about architecture, urban planning, and history.

“In the course of two decades in the mid-nineteenth century, Paris was transformed from a medieval town into a modern city. . . an astonishing makeover, which displaced three hunred and fifty thousand Parisians and razed most of the historic city. . . . Wide-ranging and readable history.” —The New Yorker

“A fine account of the reconstruction of Paris. . . . Kirkland clearly knows Paris intimately, writes lucid and engaging prose, and is both spirited in his advocacy of Napoleon III and clear-eyed about how he was able to do what he did. . . . In the end Kirkland tells a cautionary tale. While it is an immense pleasure to accompany him as he leads us through the planning and building of the great boulevards, the construction of the Opera House and the reconstruction of the Louvre, it is also sobering to realize that in the process of gaining much, Paris lost much as well, in particular medieval neighborhoods that had profoundly influenced the city’s character.” —Washington Post

“Long before Robert Moses set about sculpting New York City, Baron Haussmann—with the blessings of Napoleon III (the Napoleon’s nephew)—transformed Paris from a medieval maze into a modern metropolis. . . . Kirkland is an able navigator of architectural history—vivid descriptions abound, and the evolution of the city’s infrastructure, public spaces, and other amenities is a testament to the oft overlooked reign of Napoleon III. Lovers of the City of Light and urban planners alike will find Kirkland’s survey illuminating.” —Publishers Weekly

“Stephane Kirkland succeeds in linking strands of politics and finance, to those of history, art and beauty, with a skill that lends his book a most contemporary cutting edge.” —Alistair Horne, author of Seven Ages of Paris

“In this richly illustrated, broadly researched volume we follow, step by audacious step, as these two men raze neighborhoods, float bond measures, and, through daring, gamesmanship, even corruption, craft the modern City of Light.” —Penelope Rowlands, author of Paris Was Ours