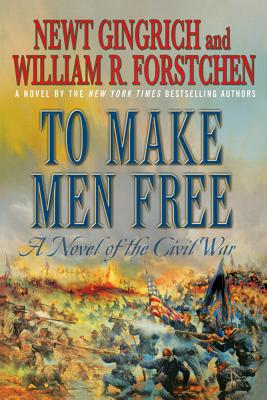 This is book number 1 in the George Washington Series series.

With To Make Men Free (originally published as The Battle of the Crater), New York Times bestselling authors Newt Gingrich and William R. Forstchen take readers to the center of a nearly forgotten Civil War confrontation, a battle that was filled with controversy and misinterpretation even before the attack began. June 1864: the Civil War is now into its fourth year of bloody conflict with no end in sight. James O'Reilly—famed artist, correspondent, and former companion of Lincoln—is summoned discreetly to a meeting with the President. His old friend gives him a difficult assignment: travel to the trenches outside of Richmond to be Lincoln's eyes and ears amongst the men, sending back an honest account of the front.

Meanwhile, General Ambrose Burnside, a hard luck commander out of favor with his superiors, has an ingenious plan to break through the closest point on the Confederate line by tunneling forward from the Union position beneath the fort to explode its defenses. The risks are high, and Burnside needs a brave division of the United States Colored Troops for one desperate rush that just might bring victory. As the battleground drama unfolds, this must-read work rewrites our understanding of one of the great battles of the war, providing a sharp, rousing and harshly realistic view of politics and combat during the darkest year of the Civil War.

Praise for the works of Newt Gingrich and William R. Forstchen

Newt Gingrich, former Speaker of the House, is the author of several bestselling books, including Valley Forge, To Try Men's Souls, Pearl Harbor and Gettysburg (all with William R. Forstchen). He is a member of the Defense Policy Board and co-chair of the UN Task Force, is the longest-serving teacher of the Joint War Fighting course for Major Generals, and served in Congress for twenty years. He is also the founder of the Center for Health Transformation.

“Gingrich and Forstchen write with authority and with sensitivity.” —St. Louis Post Dispatch on Gettysburg

“Grim, gritty, realistic, accurate, and splendid, this is a soaring epic of triumph over almost unimaginable odds.” —Library Journal on To Try Men's Souls

“With each book… Gingrich and Forstchen have gone from strength to strength as storytellers.” —William Trotter, The Charlotte Observer, on Never Call Retreat

“The authors' research shines in accurate accounts of diplomatic maneuvering as well as the nuts-and-bolts of military action.” —Publishers Weekly on Pearl Harbor

“The writing is vivid and clear.” —Washington Times on Gettysburg