Apples and Oranges: My Brother and Me, Lost and Found (Paperback) 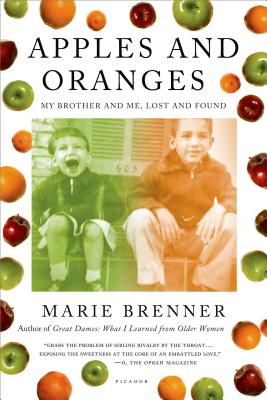 Apples and Oranges: My Brother and Me, Lost and Found (Paperback)

A TOP TEN FAVORITE BOOK OF THE YEAR--MICHIKO KAKUTANI, THE NEW YORK TIMES

A ST. LOUIS POST-DISPATCH BEST MEMOIR OF THE YEAR


Marie Brenner's extraordinary memoir of sibling rivalry asks a universal question: How can two people from the same family turn out so entirely different? Brenner's brother, Carl, lives in the apple country of Washington State, cultivating his orchards, polishing his guns, and attending church, while Marie, a world-class journalist and bestselling author, leads a sophisticated life among the "New York libs" whom he loathes. His life far from their secular Jewish childhood in Texas was as mysterious to her as their tangled past. In this affecting family saga, Brenner investigates their contentious history and discovers how inspiring it can be to turn a brother into an ally. Honest, funny, and true, Apples and Oranges is a moving story of sibling rivalry and redemption.

Marie Brenner's Vanity Fair exposé of the tobacco industry was the basis for the Academy Award-nominated film The Insider. She also wrote Great Dames: What I Learned from Older Women.

“Grabs the problem of sibling rivalry by the throat . . . exposing the sweetness at the core of an embattled love.” —O, The Oprah Magazine

“In this elegiac memoir, the author, a reporter, applies the same investigative skills that led to her exposé of the tobacco industry and Enron to a more intimate subject: her contentious relationship with her late brother. . . . At once comic and tinged with regret.” —The New Yorker

“If Marie Brenner and her brother, Carl, can learn to love each other, there might be hope for our divided America after all. . . . Brenner reminds us that it's more productive to eat apples than to throw them.” —Entertainment Weekly