Dispatches from the Muckdog Gazette: A Mostly Affectionate Account of a Small Town's Fight to Survive (Paperback) 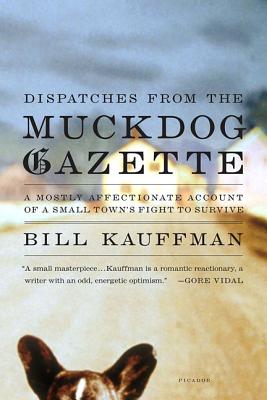 Dispatches from the Muckdog Gazette: A Mostly Affectionate Account of a Small Town's Fight to Survive (Paperback)

Bill Kauffman, a self-proclaimed "placeist" who believes that things urban are homogenizing our national scene, returned to his roots after a bumpy ride on the D.C. fast track. Rarely has he ventured forth since. Here he illuminates the place he loves, traveling from Batavia's scenic vistas to the very seams of its grimy semi-industrial pockets, from its architecturally insignificant new mall to the pastoral grounds of its internationally known School for the Blind. Not one to shy from controversy, Kauffman also investigates his town's efforts to devastate its landmarks through urban renewal, the passions simmering inside its clogged political machinery, and the sagging fortunes of its baseball heroes, the legendary Muckdogs.

Bill Kauffman has written for The Independent in London and The Wall Street Journal. He is the author of Dispatches from the Muckdog Gazette and Ain't My America. Although Batavia remains his psychic home, he now resides five miles away in Elba, New York.

“A small masterpiece...Kauffman is a romantic reactionary, a writer with an odd, energetic optimism.” —Gore Vidal

“There is myth and poetry in this refreshing look at a town....Kauffman is one of the most original journalistic voices in America today.” —Richmond Times-Dispatch

“An acerbically sentimental account of [Kauffman's] experience that reveals both his fascination and frustration with small-town life.” —Star-Tribune (Minneapolis)

“Those born in a small town will know what he means and probably envy him for having had the gumption to go back home.” —The Wall Street Journal