The Story of French (Paperback) 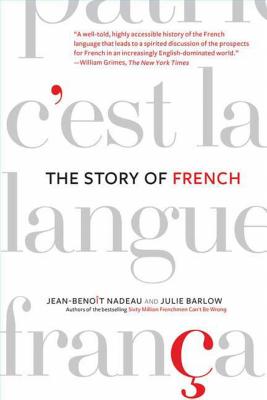 The Story of French (Paperback)

Why does everything sound better if it's said in French? That fascination is at the heart of The Story of French, the first history of one of the most beautiful languages in the world that was, at one time, the pre-eminent language of literature, science and diplomacy.

In a captivating narrative that spans the ages, from Charlemagne to Cirque du Soleil, Jean-Benoît Nadeau and Julie Barlow unravel the mysteries of a language that has maintained its global influence despite the rise of English. As in any good story, The Story of French has spectacular failures, unexpected successes and bears traces of some of history's greatest figures: the tenacity of William the Conqueror, the staunchness of Cardinal Richelieu, and the endurance of the Lewis and Clark expedition.

Through this colorful history, Nadeau and Barlow illustrate how French acquired its own peculiar culture, revealing how the culture of the language spread among francophones the world over and yet remains curiously centered in Paris. In fact, French is not only thriving—it still has a surprisingly strong influence on other languages.

As lively as it is fascinating, The Story of French challenges long held assumptions about French and shows why it is still the world's other global language.

Canadian journalist-author JEAN-BENOÎT NADEAU is an award-winning contributor to L’actualité. Writings with his life partner, JULIE BARLOW, have appeared in the Toronto Star, the Ottawa Citizen, Saturday Night, The Christian Science Monitor and the International Herald Tribune, among others. In 2003, Nadeau and Barlow published their critical and popular success, Sixty Million Frenchmen Can’t Be Wrong. They live in Montreal.

Canadian journalist-author JULIE BARLOW is a regular contributor to Montreal public affairs magazine L’actualité. Her writing has appeared in magazines and newspapers in the U.S. Canada and Europe, including the New York Times, USA Today, Toronto Star, and the International Herald Tribune. In 2003, Barlow published an international bestseller Sixty Million Frenchmen Can’t Be Wrong with her husband and co-author Jean-Benoît Nadeau. In 2006 the couple published the critical success The Story of French. They've also released The Story of Spanish.

“A well-told, highly accessible history of the French language that leads to a spirited discussion of the prospects for French in an increasingly English-dominated world.” —William Grimes, The New York Times

“Fascinating . . . a fresh approach to both the language and the history. It combines a detailed and learned grasp of the evolution of the language in various parts of the Francophone world with a personal touch.” —Mary Ann Caws, Distinguished Professor of French, English, and Comparative Literature, City University of New York

“The Story of French hums with the spirit of a novel, the heart of a travel book and the brains of an essay. Jean-Benoît Nadeau and Julie Barlow have seized an ambitious theme and made it fascinating and easy to read. With a deft and energetic touch, the authors offer personality and wisdom in this wonderful tribute to the French language and the people who speak it.” —Lawrence Hill, Author of Any Known Blood