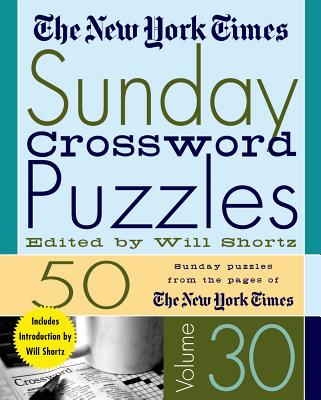 This is book number 30 in the New York Times Sunday Crossword Puzzles series.

The biggest and best puzzles from the #1 name in crosswords!

The Sunday New York Times crosswords are the most popular of the week. And in addition to forty-four of the regular, high-quality Sunday puzzles the Times is renowned for, this volume contains the six famous "Millennium" crosswords: the biggest puzzles the Times has ever published! They're each over 40% bigger than a regular Sunday and twice as big as a Daily puzzle and contain two complete sets of clues, Hard and Easy. They're like no other crossword you've ever seen, and editor Will Shortz is still deluged with requests to publish more. So prepare to dig in to the biggest, most puzzling crosswords that have ever appeared in The New York Times.