How to Remodel a Man: Tips and Techniques on Accomplishing Something You Know Is Impossible But Want to Try Anyway (Paperback) 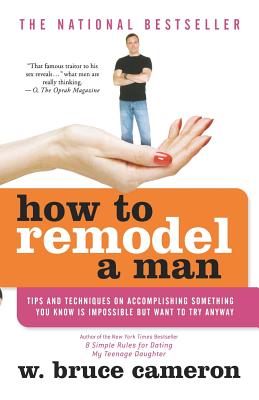 By W. Bruce Cameron
Please email or write store for pricing and availability information.
Special Request - May Not Be Available

How to Remodel a Man offers concrete, step by step instructions for actually changing the character and behavior of men. Keen insight into the male of the species by one of its own, will for the first time shed light on such mysterious subjects as "Why can't men open a refrigerator and see the mayonnaise?"

With clear, step-by-step instructions for actually altering the character and behavior of the male of the species, you'll learn:
- What to do when men pretend not to be able to do housework
- How to tell a man that no matter how much he yells at the television, he's not really a member of the team
- Why the male body smells like it is decomposing
- What to do when men cut themselves on the competitive edgeHow to contact the male brain via the ears
- About tools and why men need to have all of them
- Men may be from Mars but they're not going back
- About changing the toilet paper roll-a 12 step program
- How to take a man to the opera and what to do about the resulting coma
- Why men think shirts have a sniff test
- How to train a man to put the toilet seat down even though he's got lots of good arguments why it should be left up

This ground-breaking book is a must-read for anyone who is related to a man in any fashion.

No one had heard of W. BRUCE CAMERON, when he started his Internet-based humor column in 1995, but within a year he was the most widely distributed humorist on the World Wide Web. His column on raising teenagers inspired such a response he expanded it into the book 8 Simple Rules for Dating My Teenage Daughter. The book became a New York Times bestseller and the basis for the TV show 8 Simple Rules on ABC. He is currently working on turning How to Remodel A Man into a TV series. Now a nationally syndicated columnist, he lives in Santa Monica, California, with his teenage son.

"It's a book only Cameron could write.... Down to earth and funny, funny, funny.”— The National Society of Newspaper Columnists