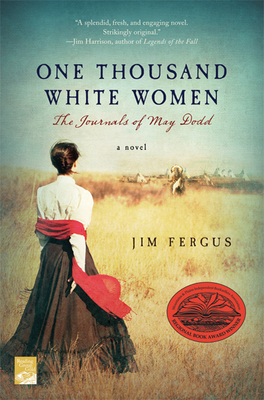 This is book number 1 in the One Thousand White Women Series series.

Based on an actual historical event but told through fictional diaries, this is the story of May Dodd—a remarkable woman who, in 1875, travels through the American West to marry the chief of the Cheyenne Nation.

One Thousand White Women begins with May Dodd’s journey into an unknown world. Having been committed to an insane asylum by her blue-blood family for the crime of loving a man beneath her station, May finds that her only hope for freedom and redemption is to participate in a secret government program whereby women from “civilized” society become the brides of Cheyenne warriors. What follows is a series of breathtaking adventures—May’s brief, passionate romance with the gallant young army captain John Bourke; her marriage to the great chief Little Wolf; and her conflict of being caught between loving two men and living two completely different lives.

“Fergus portrays the perceptions and emotions of women…with tremendous insight and sensitivity.”—Booklist

“A most impressive novel that melds the physical world to the spiritual. One Thousand White Women is engaging, entertaining, well-written, and well-told. It will be widely read for a long time, as will the rest of Jim Fergus's work.” —Rick Bass, author of Where the Sea Used to Be

“Jim Fergus knows his country in a way that's evocative Dee Brown and all the other great writers of the American West and its native peoples. But One Thousand White Women is more than a chronicle of the Old West. It's a superb tale of sorrow, suspense, exultation, and triumph that leaves the reader waiting to turn the page and wonderfully wrung out at the end.” —Winston Groom, author of Forrest Gump