The People of Forever Are Not Afraid (Hardcover) 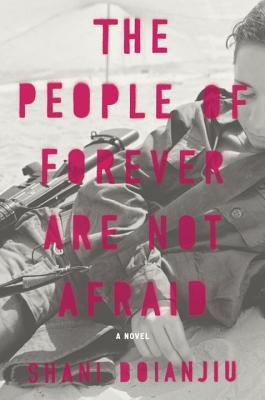 By Shani Boianjiu
$24.00
Special Request - May Not Be Available

“An utterly explosive debut, this novel in stories follows three young women who serve in the Israeli army, and it is not for the faint of heart. Boianjiu is not interested in preaching politics or rehashing battle scenes as a lesser writer might; she sticks to her characters, tracing their often uncertain progress toward adulthood. There are no pat endings here. The army, compulsory to Israeli citizens, is not, after all, some summer camp. No matter how you feel about the conflicts that Boianjiu describes, you will be riveted by her fresh perspective on them.”
— Danielle DuBois Diamond, Brazos Bookstore, Houston, TX

A “searing debut” about three young women coming of age, experiencing “the absurdities of life and love on the precipice of violence” (Vogue)

Yael, Avishag, and Lea grow up together in a tiny, dusty Israeli village, attending a high school made up of caravan classrooms, passing notes to each other to alleviate the universal boredom of teenage life. When they are conscripted into the army, their lives change in unpredictable ways, influencing the women they become and the friendship that they struggle to sustain. Yael trains marksmen and flirts with boys. Avishag stands guard, watching refugees throw themselves at barbed-wire fences. Lea, posted at a checkpoint, imagines the stories behind the familiar faces that pass by her day after day. They gossip about boys and whisper of an ever more violent world just beyond view. They drill, constantly, for a moment that may never come. They live inside that single, intense second just before danger erupts.
In a relentlessly energetic and arresting voice marked by humor and fierce intelligence, Shani Boianjiu, winner of the National Book Foundation’s “5 Under 35,” creates an unforgettably intense world, capturing that unique time in a young woman's life when a single moment can change everything.

Shani Boianjiu was born in Jerusalem in 1987 and grew up in the Galilee. She served in the Israeli Defense Forces for two years. She graduated from Harvard in 2011. Her debut novel has been published or will soon be published in 23 countries. It has been longlisted for the UK's Women's Prize for Fiction and selected as one of the ten best fiction titles of 2012 by the "Wall Street Journal." She is the youngest recipient ever of the National Book Foundation's 5 under 35 award. Her writing has appeared in the "New York Times," "The New Yorker," "Zoetrope," "Vice," the "Wall Street Journal," "The Globe and Mail," "Dazed and Confused, " the "Guardian "and" NPR.Com. "She lives in Israel.

“Remarkable…Part of this impressive book’s power is that it manages to re-create and rupture that numbness, war’s tedium and the damage it does to memory, intimacy, thought and affection. At a time when so many of America’s best writers seem to be in retreat from realism, championing a return to genre fiction (zombies and ghosts, comic-book characters and thrillers), Boianjiu’s bracing honesty is tonic. It’s a tribute to Boianjiu’s artistry and humanity that she portrays those on both sides of the barbed wire as loved and feared. The People of Forever Are Not Afraid is a fierce and beautiful portrait of the damage done by war.” -The Washington Post

"A dark, riveting window into the mind-state of Israel's younger generation, The People of Forever Are Not Afraid marks the arrival of a brilliant writer." -Wall Street Journal

“With its blend of brutal hilarity and heart-stopping anguish, this is a brilliant debut novel.” –The Boston Globe

“Stunning…[a] beautifully rendered account of the absurdities and pathos inherent to everyday life in Israel.” –Los Angeles Review of Books

“Boianjiu’s searing debut…draws from the author’s own experiences to render the absurdities of life and love on the precipice of violence.” –Vogue

“In her riveting debut novel, 25-year-old Shani Boianjiu gives a rare insider glimpse at what it’s like to be a girl coming of age in the famously fierce Israeli Defense Forces.” –Marie Claire

“In this Bildungsroman, life in the army initiates a metamorphosis from girl to woman…Boianjiu’s depiction of…the psyches of these young women is fascinating… The prose [reads] alternately like a nightmare and a dream, but this feverish indecision is what gives it its power.” –The Economist

“This powerful novel follows three friends as they come of age in a village – and then are enlisted into the Israeli Defense forces.” –O, The Oprah Magazine

“That one debut novel to get excited about.” –New York Magazine

“Eye-opening and brutally honest...In this gripping debut, [Boianjiu] weaves together the familiar coming-of-age milestones such as sexual initiation, the fierce bonds of friendship and the need for independence with the shocking realities of military life—even beyond the battlefield.” –Bookpage

“[An] elegantly written debut novel…25-year-old Boianjiu, drawing on her own years with the IDF, has written the story of a people’s resignation to living in a world that’s been strange for so long, they can no longer remember how strange it is.” –The Forward

“The extraordinarily gifted Shani Boianjiu has published a first novel that is tense and taut as a thriller yet romantic and psychologically astute….. Boianjiu writes with clarity about atrocity and the absurdity of endless war, but it’s her tender acceptance of human frailty that ultimately makes this novel so engrossing.” –More Magazine

“Boianjiu is clearly a gifted stylist and her first novel easily establishes her as a writer to watch.” —The Christian Science Monitor

“[A] tour de force…Powerfully direct…wonderfully vivid…more than just another promising debut from a talented young writer, [The People of Forever are not Afraid] warrants our full attention.” –Malibu Magazine

“The much-anticipated debut novel from 25-year-old Shani Boianjiu zigzags between the stories of three high-school friends, Yael, Avishag, and Lea, as they leave their small village on the Lebanese border to take up posts in the Israeli army… glimmers of humor and insight flash brightly in what is a brutally dark novel." –The Daily Beast

“The People of Forever Are Not Afraid provides a fine flavor of what Israeli military life is like for young women — no mean feat — and many of the episodes are engaging and revealing. Read it for that flavor and those stories.” —The Washington Independent Review of Books

“The novel resonates with considerable power…The People of Forever avoids melodrama; it is a novel of nuance and smart anti-climax…This isn't the constantly detonating Israel of American newspaper headlines. Actually, the country portrayed is a much more interesting and harrowing place. Its citizens and soldiers, we see, live in quiet expectation of calamity.” —Minneapolis Star Tribune

“It is incredibly rare and spectacular to find an author who possesses the literary talent to transport us so completely and persuasively to an utterly foreign realm.  First time novelist, 24-year-old Shani Boianjiu, has performed such a feat in The People of Forever Are Not Afraid (Hogarth/Crown, $24), her disturbing and provocative new book about the traumatic experiences of three young Israeli girls serving in the Israeli Defense Forces.” —The Jewish Journal

"In her complex, gritty first novel, Boianjiu portrays young women drafted into the Israeli army as they come of age. This is a great choice for literary fiction readers who can appreciate a thoroughly distinctive narrative voice.” — Library Journal, starred review

"Shani Boianjiu has found a way to expose the effects of war and national doctrine on the lives of young Israelis. So her subject is serious, but lest I make her work sound in any way heavy let me point out how funny she is, how disarming and full of life. Even when she is writing about death, Boianjiu is more full of life than any young writer I've come across in a long time." – Nicole Krauss, author of Great House and The History of Love

“[An] excellent debut novel…like Sheila Heti’s How Should a Person Be? meets…The Things They Carried. Irreverent, sometimes touching and often deeply weird, we fell in love with Boianjiu’s voice from the first page. Bottom line? It sucked us in and carried us off at gunpoint.” —Flavorwire.com

“This haunting coming-of-age story skillfully portrays the individual side of a war not often spoke of, much less written about. Destined to be an award-winner, this novel gives the reader a unique perspective of war and the devastation experienced by those fighting it.” –SheKnows.com

“The People of Forever Are Not Afraid is... carefully wrought, consciously structured, creatively imagined.” –The New Republic

“Readers will embrace the complexity of the writing.” —Kirkus Reviews

“Boianjiu’s debut novel chronicles the gritty, restless experiences of three young women during their compulsory service in the Israeli Defense Forces…The bold, matter-of-fact narrative…[mirrors] the complexity of a landscape in perpetual transition.” —Booklist

“The term ‘a distinct new voice in literature” had became a cliché long before Shani Boianjiu was born, but there is no better way to describe her unique piercing tone. Reading it feels like having your heart sawn in to two by a very dull knife. The People of Forever are Not Afraid is one of those rare books that truly make you want to cry but at the same time doesn’t allow you to.” – Etgar Keret, author of The Nimrod Flipout

“This is big literature – the realism that nests inside the word surrealism.” – Rivka Galchen, author of Atmospheric Disturbances

“If anyone ever tells you the novel is dead, don't say anything, just give them this book. Shani Boianjiu is an enormous new talent. This is one of the boldest debuts I can think of---it reads like it was written in bullets, tear gas, road flares and love. I demand another book from her, immediately." – Alexander Chee, author of Edinburgh

“I was hooked on Shani Boianjiu's remarkable voice from the first sentence of this book. It's urgent, funny, horrifying, fresh, the kind of thing I've been dying to read for ages.” –Miriam Toews, author of Irma Voth and A Complicated Kindness

“Boianjiu is a writer who should be talked about for literary reasons, not the least of which is that her stories refuse to submit to moral clichés.” -The Times of Israel