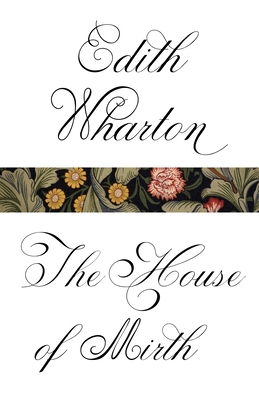 By Edith Wharton
$11.00
Available to Order - Usually Arrives in Our Store in 4 to 7 Days

Set among the glittering salons of Gilded Age New York, Edith Wharton’s most popular novel is a moving indictment of a society whose soul-crushing limitations destroy a woman too spirited to be contained by them.

The beautiful, much-desired Lily Bart has been raised to be one of the perfect wives of the wealthy upper class, but her drive and her spark of independent character prevent her from conforming sucessfully. Her desire for a comfortable life means that she will not marry for love without money, but her resistance to the rules of the social elite endangers her many marriage proposals and leads to a dramatic downward spiral into debt and dishonor. One of Edith Wharton’s most bracing and nuanced portraits of the life of women in a hostile, highly ordered world, The House of Mirth unfolds with the force of classical tragedy.

Edith Wharton (1862-1937) was born into high society in New York City. After divorcing her husband in 1913 she took up permanent residence in France. Her many stories and novels were critical successes as well as bestsellers and she won the Pulitzer Prize for The Age of Innocence in 1921.

With an introduction by Elizabeth Hardwick,
Contemporary Reviews, and Letters
Between Edith Wharton and Her Publisher

"        A frivolous society can acquire dramatic significance only through what its frivolity destroys."--Edith Wharton

Lily Bart knows that she must marry--her expensive tastes and mounting debts demand it--and, at twenty-nine, she has every artful wile at her disposal to secure that end. But attached as she is to the social world of her wealthy suitors, something in her rebels against the insipid men whom circumstances compel her to charm.
"Why must a girl pay so dearly for her least escape," Lily muses as she contemplates the prospect of being bored all afternoon by Percy Grice, dull but undeniably rich, "on the bare chance that he might ulti-
mately do her the honor of boring her for life?" Lily is distracted from her prey by the arrival of Lawrence Selden, handsome, quick-witted, and penniless. A runaway bestseller on publication in 1905, The House of Mirth is a brilliant romantic novel of manners, the book that established Edith Wharton as one of America's greatest novelists.

"        A tragedy of our modern life, in which the relentlessness of what men used to call Fate and esteem, in their ignorance, a power beyond their control, is as vividly set forth as ever it was by Aeschylus or Shakespeare." --The New York Times

Edith Wharton (1862-1937) was awarded the Pulitzer Prize in
1920 for The Age of Innocence. But it was the publication of The House of Mirth in 1905 that marked Wharton's coming-of-age as a writer.