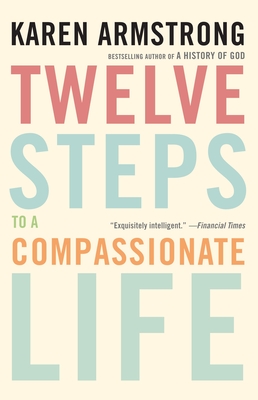 One of the most original thinkers on the role of religion in the modern world—author of such acclaimed books as A History of God, Islam, and Buddha—now gives us an impassioned and practical book that can help us make the world a more compassionate place.

Karen Armstrong believes that while compassion is intrinsic in all human beings, each of us needs to work diligently to cultivate and expand our capacity for compassion. Here, in this straightforward, thoughtful, and thought-provoking book, she sets out a program that can lead us toward a more compassionate life.

The twelve steps Armstrong suggests begin with “Learn About Compassion” and close with “Love Your Enemies.” In between, she takes up “compassion for yourself,” mindfulness, suffering, sympathetic joy, the limits of our knowledge of others, and “concern for everybody.” She suggests concrete ways of enhancing our compassion and putting it into action in our everyday lives, and provides, as well, a reading list to encourage us to “hear one another’s narratives.” Throughout, Armstrong makes clear that a compassionate life is not a matter of only heart or mind but a deliberate and often life-altering commingling of the two.

Karen Armstrong is the author of numerous other books on religious affairs—including A History of God, The Battle for God, The Case for God, Islam, Buddha, and The Great Transformation—and two memoirs, Through the Narrow Gate and The Spiral Staircase. Her work has been translated into forty-five languages. She has addressed members of the U.S. Congress on three occasions; lectured to policy makers at the U.S. State Department; participated in the World Economic Forum in New York, Jordan, and Davos; addressed the Council on Foreign Relations in Washington and New York; is increasingly invited to speak in Muslim countries; and is now an ambassador for the UN Alliance of Civilizations. In February 2008 she was awarded the TED Prize and recently launched with TED a Charter for Compassion, created online by the general public and crafted by leading thinkers in Judaism, Christianity, Islam, Hinduism, and Buddhism to restore compassion to the centre of morality and religion. She lives in London.

The author invites you to start a Twelve Steps to a Compassionate Life Reading Group in your community, school, or workplace. An Organizer’s Guide, including tips for starting the group, discussion questions, sample promotional material, and more, can be found online at www.CharterForCompassion.org/Learn/ReadingGroups.

“Rich with wisdom and provocative ideas that stimulate deeper thinking and encourage individuals to identify a particular contribution to the global effort.” —Christian Science Monitor

“Leaning on the wisdom of disparate faiths and belief systems, Armstrong lays out a pluralistic and, ultimately, secular way to spread compassion that’s easy to believe in.” –Washington Post

“Impressive. . . . She seeks to retrain us from an ego-fuelled outlook of partiality and prejudice to an informed, expanded humanity.” —The Globe and Mail

“When I hear that Karen Armstrong, the widely respected religion scholar…has a new book called Twelve Steps to a Compassionate Life, I figure it’s about big stuff—and she does not disappoint.” —Laurie Abraham, Elle

“[An] important and useful book that will help many readers take on humanity’s most important task: creating a better, more compassionate world.” —Tricycle