One Nation, Under Attack: How Big-Government Liberals Are Destroying the America You Love (Paperback) 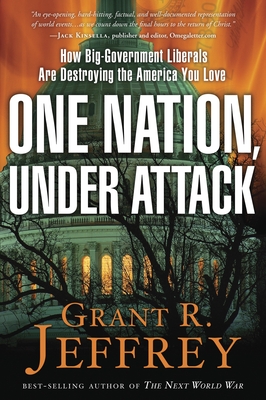 The enemies of free-market capitalism have launched their final attack. History’s most powerful nation soon will be reduced to an isolated, impoverished country with no influence over international affairs.

A close reading of prophecy reveals no mention of the United States. The wealthiest and most powerful nation in history will play no visible role in the culminating events of this age. Prophecy expert Grant R. Jeffrey has exposed the hidden causes behind the rapid disappearance of America as we know it.

No longer will other nations count on America to come to their aid. Aggressor nations will not have to fear the possibility of U.S. retaliation because very soon, America will be too weak to take action. And just at the time when the United States is weakened nearly beyond recognition, the Antichrist will unleash his evil rule over the world.

When America falls, the collapse will come rapidly. It is to your advantage to know in advance what to look for. In One Nation, Under Attack you will find a workable plan to help you protect your family and your future from the far-reaching economic devastation to come.

GRANT R. JEFFREY is the internationally acclaimed author of Shadow Government, The Global-Warming Deception, The Next World War, and more than twenty other books with more than 7 million copies in print. Grant received his Ph.D. from Louisiana Baptist University and established himself as one of the sharpest minds in eschatology.

“One Nation, Under Attack is an eyeopening, hard-hitting, factual, andfwell-documented representation of world events as they relate to Biblefprophecy—as we count down the final hours to the return of Christ. Where is America in prophecy? What about China? Will the U.S. economy survive? One Nation, Under Attack takes on these questions and
more. Grant Jeffrey—my dear friend, mentor, and colleague of more than twenty years—has gone home to meet the Lord, and our loss is heaven’s gain. But I am sure you will agree that Grant’s last book is also his best. Maranatha!”
—Jack Kinsella, publisher and editor, Omegaletter.com

“Not only did Grant Jeffrey see the signature of God written across the pages of Scripture, but all of us who knew him could see the signature of God written across his heart, soul, and mind as he declared the gospel of Jesus Christ. Grant never hesitated to preach and teach the promise of Christ’s coming and the message that Jesus alone can bring peace to a troubled soul and give you the hope of heaven.”
—Dr. Ed Hindson, dean, Institute of Biblical Studies, Liberty University

“Heralding the premillennial revival, Grant perfected the art of the prophecy book in a way that no one had done  before: spectacular new discoveries, cutting-edge research, timely subjects that weigh heavily on the public’s mind. When Grant said Jesus was coming soon, we believed him! He was the voice of authority in the world of Bible prophecy. Grant affected millions of lives with his books and television ministry. Scholar, tireless researcher, mentor, friend. Grant’s voice is one we came to trust and depend on.”
—Bob Ulrich, editor, Prophecy in the News

“On a personal level I’m saddened that I’ll not see Grant Jeffrey again on this earth. One of the world’s great authorities on Bible prophecy about the end times, and one of the great warriors for the faith, has been withdrawn
by the Lord. I rejoice that Grant is now face to face with the Lord. His burdens are over, his work is finished. I know we will miss the voice of Grant Jeffrey. But we shall all see him soon.”
—Hal Lindsey, best-selling author and television host, The Hal Lindsey Report One