The Last Will of Moira Leahy (Hardcover) 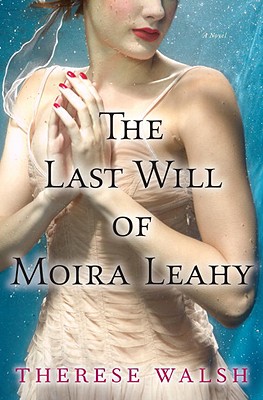 The Last Will of Moira Leahy (Hardcover)

"An original, intriguing tale about the ways that love can break us or bind us."
–Therese Fowler, author of Souvenir and Reunion

This haunting debut novel explores the intense bond of sisterhood as a grieving twin searches for her own identity in the ruins of her sister's past.

A LOST SHADOW
Moira Leahy struggled growing up in her prodigious twin's shadow; Maeve was always more talented, more daring, more fun. In the autumn of the girls' sixteenth year, a secret love tempted Moira, allowing her to have her own taste of adventure, but it also damaged the intimate, intuitive relationship she'd always shared with her sister. Though Moira's adolescent struggles came to a tragic end nearly a decade ago, her brief flirtation with independence will haunt her sister for years to come.

A LONE WOMAN
When Maeve Leahy lost her twin, she left home and buried her fun-loving spirit to become a workaholic professor of languages at a small college in upstate New York. She lives a solitary life now, controlling what she can and ignoring the rest–the recurring nightmares, hallucinations about a child with red hair, the unquiet sounds in her mind, her reflection in the mirror. It doesn't help that her mother avoids her, her best friend questions her sanity, and her not-quite boyfriend has left the country. But at least her life is ordered. Exactly how she wants it.

A SHARED PAST
Until one night at an auction when Maeve wins a keris,a Javanese dagger that reminds her of her lost youth and happier days playing pirates with Moira in their father's boat. Days later, a book on weaponry is nailed to her office door, followed by the arrival of anonymous notes, including one that invites her to Rome to learn more about the blade and its legendary properties. Opening her heart and mind to possibility, Maeve accepts the invitation and, with it, also opens a window into her past.

Ultimately, she will revisit the tragic November night that shaped her and Moira's destinies–and learn that nothing can be taken at face value–as one sister emerges whole and the other's score is finally settled.

The Last Will of Moira Leahyis a mesmerizing and romantic consideration of the bonds of family, the impossibility of forgetting, and the value of forgiveness.

Finalist for the 2010 RITA Award for Best First Novel

“Walsh's satisfying novel follows Maeve Leahy, a brilliant young professor, in her pursuit for answers about her family and herself. [She] ably shifts between Maeve's current quest and flashbacks showing the twins as children, revealing little by little the story behind Maeve's grief. . . . [A] pleasing blend of mystery, romance and the supernatural.”
—Publishers Weekly


“Walsh’s debut is a magical, involving journey, one that mixes a compelling mystery from the past with a suspenseful search in the present.”
—Booklist

“Mystery, romance and historical elements blend together in this captivating debut. The magical adventure will take readers on a journey of the heart that reunites the souls of twin sisters. Walsh weaves an enchanting, poignant and enthralling tale.”
—Romantic Times Book Reviews

"Moira’s confused emotions—envy, guilt, passion and regret as she deceives the boy she loves and usurps her sister’ s place—are delineated with heart-wrenching believability."
—Kirkus Reviews

"A hauntingly beautiful story about grief, the language of twins, and the healing power of a bond that is stronger than death. The characters of Moira and Maeve will linger long after you finish this amazing first novel."
—Brunonia Barry, New York Times bestselling author of The Lace Reader

"The Last Will of Moira Leahy is haunting, exotic and romantic–the way Gothic tales are romantic, wrapped in luscious, dark atmosphere. It's a magical debut and I can't wait for more from Therese Walsh. She's one to watch."
—Sarah Addison Allen, New York Times bestselling author of Garden Spells

“This book made me want to ignore my work and neglect my children. The Last Will of Moira Leahy offers an irresistible combination of mystery, romance, psychological complexity, and lovely writing. I devoured it.”
—Leah Stewart, author of The Myth of You and Me

"Tender and transcendent, Therese Walsh’s debut novel, The Last Will of Moira Leahy is a captivating look at the truths we conceal, the scars we bear, and the journeys we all must take in order to find our way back home, back to ourselves. I loved every magical page.”
—Allison Winn Scotch, New York Times bestselling author of Time of My Life

“Is there anything more worthwhile than being taken by the hand by a true and gifted storyteller and shown a world that is at once mysterious, mesmerizing and filled with characters who deeply touch your heart? A dark psychological tale of secrets and betrayal, suspense and passion, The Last Will of Moira Leahy is a book that makes you forget everything and just spend the rest of the day and night reading. Like Rebecca, this is a tale so well told that it keeps you in its grip and doesn't let go, haunting you long after you've turned the last page. If it were written by a seasoned novelist, The Last Will of Moira Leahy would be a feat. That it is a debut makes it all the more amazing. Bravo!”
—M.J. Rose, internationally bestselling author of The Memorist