Don't Sleep, There Are Snakes: Life and Language in the Amazonian Jungle (Vintage Departures) (Paperback) 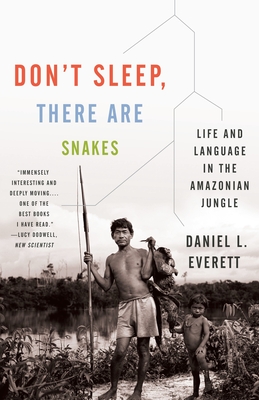 Don't Sleep, There Are Snakes: Life and Language in the Amazonian Jungle (Vintage Departures) (Paperback)

Part passionate memoir, part scientific exploration, a life-changing tale set among a small tribe of Amazonian Indians in Brazil that offers a riveting look into the nature of language, thought, and life itself.

"Immensely interesting and deeply moving.... One of the best books I have read."—Lucy Dodwell, New Scientist

A riveting account of the astonishing experiences and discoveries made by linguist Daniel Everett while he lived with the Pirahã, a small tribe of Amazonian Indians in central Brazil.

Daniel Everett arrived among the Pirahã with his wife and three young children hoping to convert the tribe to Christianity. Everett quickly became obsessed with their language and its cultural and linguistic implications. The Pirahã have no counting system, no fixed terms for color, no concept of war, and no personal property. Everett was so impressed with their peaceful way of life that he eventually lost faith in the God he'd hoped to introduce to them, and instead devoted his life to the science of linguistics.

Daniel L. Everett is the Chair of Languages, Literatures, and Cultures at Illinois State University.

"Immensely interesting and deeply moving.... One of the best books I have read."—Lucy Dodwell, New Scientist

"A story of language and faith along the sweeping banks of the Maici River.... Verdict: Read."—Time

"Destined to become a classic of popular enthnography."—The Independent, London

"A genuine and engrossing book that is both sharp and intuitive; it closes around you and reaches inside you, controlling your every thought and movement as you read it.... Impossible to forget."—Sacramento Book Review

"A fascinating look into the lives of the Piraha, an Amazonian community of hunter-gatherers."—The Minneapolis Star Tribune

"Don't Sleep, There Are Snakes makes the rain forest sound like a magic mushroom."—Harper's Magazine

"A riveting account of a Christian missionary 'converted' to the viewpoint of the Amazonian Indians he had intended to evangelize."—The Huntsville Times

"Vivid.... The book is fascinating.... May serve to bring the furor of linguistics and language research to readers who otherwise never catch sight of it."—Science

"In this fascinating and candid account of life with the Pirahã, Everett describes how he learned to speak fluent Pirahã (pausing occasionally to club the snakes that harassed him in his Amazonian "office"). He also explains his discoveries about the language-findings that have kicked off more than one academic brouhaha."--Publishers Weekly (Signature Review)

"Rich account of fieldwork among a tribe of hunter-gatherers in Brazil . . . introduce[s] non-specialists to the fascinating ongoing debate about the origin of languages. . . . Everett's experiences and findings fairly explode from these pages and will reverberate in the minds of readers."—Kirkus Reviews (Starred Review)

"Dan Everett has written an excellent book. First, it is a very powerful autobiographical account of his stay with the Pirahã in the jungles of the Amazon basin. Second, it is a brilliant piece of ethnographical description of life among the Pirahã. And third, and perhaps most important in the long run, his data and his conclusions about the language of the Pirahã run dead counter to the prevailing orthodoxy in linguistics. If he is right, he will permanently change our conception of human language."—John Searle, Slusser Professor of Philosophy, University of California, Berkeley

"Dan Everett is the most interesting man I have ever met. This story about his life among the Pirahãs is a fascinating read. His observations and claims about the culture and language of the Pirahãs are astounding. Whether or not all of his hypotheses turn out to be correct, Everett has forced many researchers to reevaluate basic assumptions about the relationship among culture, language and cognition. I strongly recommend the book."—Edward Gibson, Professor of Cognitive Sciences, Massachusetts Institute of Technology