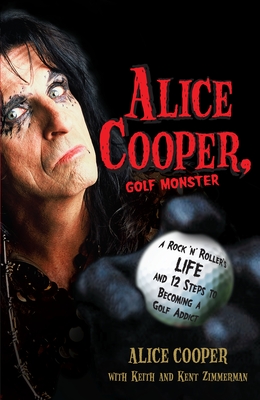 In this tell-all memoir, Alice Cooper speaks candidly about his life and career, including all the years of rock ’n’ roll history he’s been a part of, the addictions he faced, and the surprising ways he found redemption.

From a childhood spent as a minister’s son worshiping baseball and rock ’n’ roll; to days on the road with his band, working to make a name for themselves; to stardom and the insanity that came with it, including a quart-of-whiskey-a-day habit; to drying out at a sanitarium back in the late ’70s, Alice Cooper paints a rich and rockin’ portrait of his life and his battle against addiction—fought by getting up daily at 7 a.m. to play 36 holes of golf.

Alice tells hilarious, touching, and sometimes astounding stories about Led Zeppelin and the Doors, George Burns and Groucho Marx, John Daly and Tiger Woods . . . everyone is here from Dalí to Elvis to Arnold Palmer.

Alice Cooper, Golf Monster is the incredible story of someone who rose through the rock ’n’ roll ranks releasing platinum albums and selling out arenas with his legendary act—all while becoming one of the best celebrity golfers around.
Alice Cooper is a legendary rock icon, his name a household word. He tours around the world every year and continues to release albums. He also participates in many celebrity charity events and has hosted ten of his own annual Alice Cooper Celebrity Golf Tournaments. He is a comfortable five handicap. Keith and Kent Zimmerman are a unique writing team of twin brothers. They are the coauthors of twelve books, including Rotten with John Lydon of the Sex Pistols, Orange County Choppers™: The Tale of the Teutuls, and the New York Times bestseller Hell’s Angel: The Life and Times of Sonny Barger and the Hell’s Angels Motorcycle Club.

“Alice writes like he golfs: straight and right down the middle. Like a lot of us golf addicts, he's spent his fair share of his life getting out of the rough and back onto the green. If you're like me and only read like a book a year (OK, like every decade), this should be the one.”

“What a blast from the past, and such insight to the future! Alice Cooper, Golf Monster shares Alice's personal life mission, interwoven with great stories and characters from the 60's through the present in Rock and Roll. Not to mention some wonderful golf tips and experiences, humorously presented. Thank you Alice, for a nice ride!”
—Michael Douglas, actor and creator of the Michael Douglas & Friends Charity Golf Tournament
“Few things are more surreal than playing golf with a guy named Alice. But by the time you reach the second tee, you realize that No More Mr. Nice Guy is one of the wittiest and engaging playing partners you've ever had. Plus, the guy can play! For those who aren't likely to experience the pleasure of a quiet, leisurely round with the man who spends his nights singing "School's been blown to pieces," this book provides the next best thing.”
—Steve Eubanks, author of Golf Freek
“Debauchery, demons and divots! This is the only book I've ever read that should come in 3-D; the crazy stories come right at you from Sinatra to KISS to the Moscow Golf Club.”
—Gary McCord, author of Golf for Dummies