The People's Princess: Cherished Memories of Diana, Princess of Wales, From Those Who Knew Her Best (Hardcover) 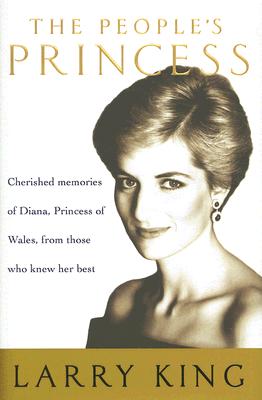 By Larry King
Please email or write store for pricing and availability information.
Special Request - May Not Be Available

In the ten years since Princess Diana’s shocking and tragic death in 1997, her hold on the world’s imagination has only increased. For The People’s Princess, Larry King asked many people who knew Diana, some officially and some more personally, for their favorite memories.

Sir Richard Branson recalls Diana sitting in the cockpit of one of his private planes with baby Prince William on her lap; as they flew past Windsor Castle she announced, “On our right you have Grandma’s house!” Heather Mills, who, like Diana, has been a tireless campaigner for charitable causes, recalls Diana’s work to eradicate the scourge of land mines, as well as the time she was photographed shaking hands with an AIDS patient in a London hospital, doing so much to counteract the stigma associated with the disease at the time. British radio and television personality Chris Tarrant recalls how clearly nervous he was upon meeting Diana for the first time, and how she put him at ease with an incredibly rude joke about Kermit the Frog. Photographer Tim Graham remembers Diana lying on the floor with baby William in order to coax a smile from the young prince. And her chief bodyguard recalls how happy and at peace she seemed on the day he agreed to her simple request: to be allowed to walk, truly alone for once, along a beautiful, deserted beach.

Some of these recollections are warm and intimate, celebrating Diana for her ability to make a human connection with everyone she met, others are perceptive and revealing, even about Diana’s human failings and frailties. Together, they coalesce into a multifaceted portrait of a woman that the world has long desired to know a little better.