The Children of Men (Paperback) 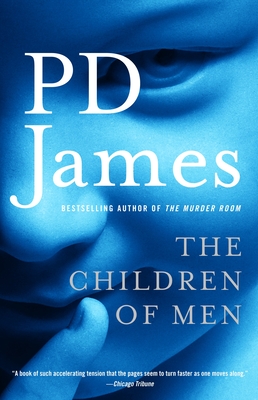 The Children of Men (Paperback)


Available to Order - Usually Arrives in Our Store in 4 to 7 Days
A modern science fiction classic from an acclaimed bestselling author: The year is 2021. No child has been born for twenty-five years. The human race faces extinction.

Civilization itself is crumbling as suicide and despair become commonplace. Oxford historian Theodore Faron, apathetic toward a future without a future, spends most of his time reminiscing. Then he is approached by Julian, a bright, attractive woman who wants him to help get her an audience with his cousin, the powerful Warden of England. She and her band of unlikely revolutionaries may just awaken his desire to live . . . and they may also hold the key to survival for the human race.

Told with P. D. James’s trademark suspense, insightful characterization, and riveting storytelling, The Children of Men is a story of a world with no children and no future.

The inspiration for director Alfonso Cuarón's modern masterpiece of a film.

P. D. JAMES is the author of twenty books, many of which feature her detective hero Adam Dalgliesh and have been televised or filmed. She was the recipient of many honors, including the Mystery Writers of America Grand Master Award and the National Arts Club Medal of Honor for Literature, and in 1991 was created Baroness James of Holland Park. She died in 2014.

"A book of such accelerating tension that the pages seem to turn faster as one moves along." —Chicago Tribune

"As scary and suspenseful as anything in Hitchcock." —The New Yorker

"Extraordinary.... Daring.... Frightening in its implications." —The New York Times

"Fascinating, suspenseful, and morally provocative. The characterizations are sharply etched and the narrative is compelling."—Chicago Sun-Times

“[James] writes like an angel. Every character is closely drawn. Her atmosphere is unerringly, chillingly convincing. And she manages all this without for a moment slowing down the drive and tension of an exciting mystery.” —The Times (UK)