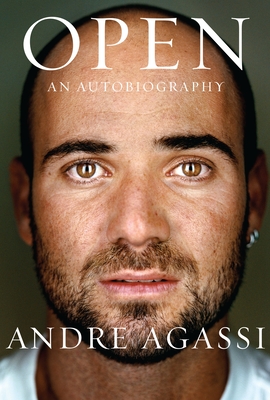 
Available to Order - Usually Arrives in Our Store in 4 to 7 Days
From Andre Agassi, one of the most beloved athletes in history and one of the most gifted men ever to step onto a tennis court, a beautiful, haunting autobiography.

Agassi’s incredibly rigorous training begins when he is just a child. By the age of thirteen, he is banished to a Florida tennis camp that feels like a prison camp. Lonely, scared, a ninth-grade dropout, he rebels in ways that will soon make him a 1980s icon. He dyes his hair, pierces his ears, dresses like a punk rocker. By the time he turns pro at sixteen, his new look promises to change tennis forever, as does his lightning-fast return.

And yet, despite his raw talent, he struggles early on. We feel his confusion as he loses to the world’s best, his greater confusion as he starts to win. After stumbling in three Grand Slam finals, Agassi shocks the world, and himself, by capturing the 1992 Wimbledon. Overnight he becomes a fan favorite and a media target.

Agassi brings a near-photographic memory to every pivotal match and every relationship. Never before has the inner game of tennis and the outer game of fame been so precisely limned. Alongside vivid portraits of rivals from several generations—Jimmy Connors, Pete Sampras, Roger Federer—Agassi gives unstinting accounts of his brief time with Barbra Streisand and his doomed marriage to Brooke Shields. He reveals a shattering loss of confidence. And he recounts his spectacular resurrection, a comeback climaxing with his epic run at the 1999 French Open and his march to become the oldest man ever ranked number one.

In clear, taut prose, Agassi evokes his loyal brother, his wise coach, his gentle trainer, all the people who help him regain his balance and find love at last with Stefanie Graf. Inspired by her quiet strength, he fights through crippling pain from a deteriorating spine to remain a dangerous opponent in the twenty-first and final year of his career. Entering his last tournament in 2006, he’s hailed for completing a stunning metamorphosis, from nonconformist to elder statesman, from dropout to education advocate. And still he’s not done. At a U.S. Open for the ages, he makes a courageous last stand, then delivers one of the most stirring farewells ever heard in a sporting arena.

With its breakneck tempo and raw candor, Open will be read and cherished for years. A treat for ardent fans, it will also captivate readers who know nothing about tennis. Like Agassi’s game, it sets a new standard for grace, style, speed, and power.
Andre Agassi played tennis professionally from 1986 to 2006. Often ranked number one, he captured eight Grand Slam singles championships. Founder of the Andre Agassi Charitable Foundation, he has raised more than $85 million for the Andre Agassi College Preparatory Academy for underprivileged children in Las Vegas, where he lives with his wife, Stefanie Graf, and their two children.

“Insightful [and] exceedingly well-written . . . [Open] has the cadence and plotting of a good novel . . . The raw energy and emotion throughout are pure Agassi.”
-Newsday Top 10 Books of 2009

“Surprisingly candid . . . The baseline bad boy serves up his harrowing anecdotes with the same force he put behind every on-court ace.”
-Entertainment Weekly 10 Best Nonfiction Books of 2009

“Bracingly devoid of triumphalist homily, Agassi’s is one of the most passionately anti-sports books ever written by a superstar athlete.”
-The New York Times 100 Notable Books of 2009

“Andre Agassi’s memoir is just as entrancing as his tennis game . . . By sharing an unvarnished, at times inspiring story in an arresting, muscular style, Agassi may have just penned one of the best sports autobiographies of all time. Check—it’s one of the better memoirs out there, period.”
-Sean Gregory, Time

“Not just a first-rate sports memoir but a genuine bildungsroman, darkly funny yet also anguished and soulful. It confirms what Agassi’s admirers sensed from the outset, that this showboat . . . was not clamoring for attention but rather conducting a struggle to wrest some semblance of selfhood from the sport that threatened to devour him.”
-Sam Tanenhaus, The New York Times Book Review

“A remarkable and quite unexpected volume, one that sails well past its homiletic genre into the realm of literature, a memoir whose success clearly owes not a little to a reader’s surprise in discovering that a celebrity one may have presumed to know on the basis of that haircut and a few television commercials hawking cameras via the slogan ‘image is everything’ emerges as a man of parts—self-aware, black-humored, eloquent.”
-Michael Kimmelman, The New York Review of Books

“[A] heartfelt memoir . . . Agassi’s style is open, all right, and his book, like so many of his tennis games, is a clear winner.”
-O, The Oprah Magazine

“Open describes [Agassi’s] personal odyssey with brio and unvarnished candor . . . His career-comeback tale is inspiring but even more so is another Open storyline. It could be called: The punk grows up . . . Countless athletes start charitable foundations, but frequently the organizations are just tax shelters or PR stunts. For Mr. Agassi helping others has instead become his life’s calling . . . Open is a superb memoir, but it hardly closes the books on an extraordinary life.”
-Jay Winik, The Wall Street Journal

“It’s both astonishing and a pleasure to report that Andre Agassi . . . has produced an honest, substantive, insightful autobiography . . . The bulk of this extraordinary book vividly recounts a lost childhood, a Dickensian adolescence, and a chaotic struggle in adulthood to establish an identity . . . While not without excitement, Agassi’s comeback to No. 1 is less uplifting than his sheer survival, his emotional resilience, and his good humor in the face of the luckless cards he was often dealt.”
-Michael Mewshaw, Washington Post

“Honest in a way that such books seldom are . . . An uncommonly well-written sports memoir.”
-Charles McGrath, The New York Times

“Agassi weaves a fascinating tale of professional tennis and personal adversity . . . His tale shows that success is measured both on and off the court.”
-Doree Shafrir, New York Post

“Refreshingly candid . . . This lively, revealing, and entertaining book is certain to roil the tennis world and make a big splash beyond.”
-Publishers Weekly

“Enigmatic tennis great Agassi lays it all on the line . . . Agassi’s photographic recall of pivotal matches evokes the raw intensity of watching them from the stands. Lovers of the sport will also appreciate this window into the mind of a champion . . . An ace of a tale about how one man found his game.”
-Kirkus