Elvis by the Presleys (Hardcover) 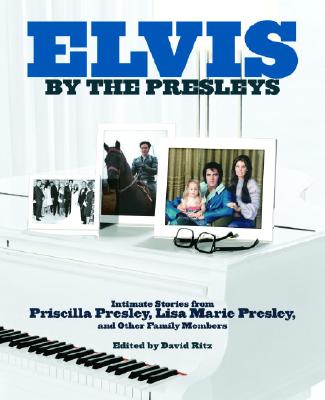 For the first time, the inside story of legendary entertainer Elvis Presley’s life as a husband, father, son, cousin, friend, spiritual seeker — Priscilla and Lisa Marie Presley, and other family members, come together to memorialize our greatest star in this stunningly illustrated companion to a major television special and longer-form documentary.

Elvis by the Presleys is a uniquely fascinating treasure and serves as the essential companion to a major television special on CBS and, from Sony BMG, a longer-form documentary DVD and its related CD. Culled from hours of new family interviews conducted for the television special and DVD (much of it appearing exclusively in this book), enhanced with Elvis quotes, and illustrated with private family photographs and images of personal memorabilia from the archives of Graceland/Elvis Presley Enterprises, Elvis by the Presleys is an extraordinary document about an extraordinary figure.

In all, the book is the compelling result of a historic gathering of voices of those who not only witnessed from the wings Elvis Presley’s public life, but also knew the superstar out of the spotlight. His former wife Priscilla Presley, their daughter Lisa Marie Presley, his cousin Patsy Presley Geranen, Priscilla’s parents, and members of the combined and extended families sensitively and candidly share their intimate perspective on the real person, while at the same time celebrating one of America’s greatest stars.

As Priscilla Presley puts it in Elvis by the Presleys, “Who can think of Elvis without thinking of Graceland?” Here Graceland is seen as a teeming family retreat, where the kitchen was the center of operations; where tag football games were played in the yard; where folks drove golf carts up and down the hills; and where Elvis spent many of his happiest times.

Elvis by the Presleys reveals life at Graceland like never before. We witness the arc of his love affair with Priscilla; Elvis as a father to his adored Lisa Marie; his obsessions and passions; and the strength of his musical legacy, which continues unabated to this day. There are Christmas cards here, too; contracts and invoices; selections from Lisa Marie’s childhood scrapbook; and even a picture of the champagne bottle (signed) from Elvis and Priscilla’s wedding.

Here, now, is the tumultuous story of the life of a lovely yet complex man; a portrait of the career of a brilliantly accomplished yet often frustrated artist; an insider’s tale of enduring love, related with warmth and unguarded candor . . . and a story told the way only a family can tell it.

The DVD is a longer-form presentation of the footage edited for the special. Both the special and the DVD are comprised of the family interviews, private home movies, performance footage and interviews, and photography — some of the material rare, some never before available to the public.