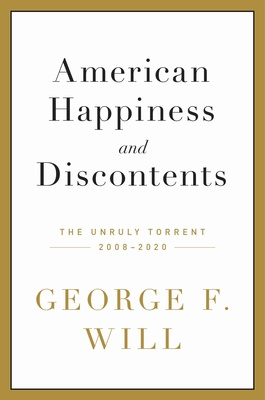 By George F. Will


On Our Shelves Now
Examine the ways in which expertise, reason, and manners are continually under attack in our institutions, courts, political arenas, and social venues with this collection from the Pulitzer Prize-winning conservative columnist.

George F. Will has been one of this country’s leading columnists since 1974. He won the Pulitzer Prize for it in 1977. The Wall Street Journal once called him “perhaps the most powerful journalist in America.” In this new collection, he examines a remarkably unsettling thirteen years in our nation’s experience, from 2008 to 2020. Included are a number of columns about court cases, mostly from the Supreme Court, that illuminate why the composition of the federal judiciary has become such a contentious subject.

Other topics addressed include the American Revolutionary War, historical figures from Frederick Douglass to JFK, as well as a scathing assessment of how State of the Union Addresses are delivered in the modern day. Mr. Will also offers his perspective on American socialists, anti-capitalist conservatives, drug policy, the criminal justice system, climatology, the Coronavirus, the First Amendment, parenting, meritocracy and education, China, fascism, authoritarianism, Frank Sinatra, Bob Dylan, The Beach Boys, and the morality of enjoying football. American Happiness and Discontents: The Unruly Torrent, 2008-2020 is a collection packed with wisdom and leavened by humor from one the preeminent columnists and intellectuals of our time.
George F. Will writes a twice-weekly syndicated column on politics and domestic and foreign affairs for the Washington Post. He began his column with the Post in 1974, and received the Pulitzer Prize for Commentary in 1977. His fifteen previous books include The Conservative Sensibility, One Man's America, Men at Work: The Craft of Baseball, and Statecraft as Soulcraft. Will grew up in Champaign, Illinois, attended Trinity College and Oxford University, and received a Ph.D. from Princeton.

“Thoroughly brilliant…George Will outdoes George Will…. His latest collection…is nothing short of spectacular…. Every column had me wanting more…. Will’s book is an antidote to the present level of discourse, and most fun for readers eager to learn well beyond policy is that so much of Will’s commentary springs from the voluminous books he consumes with great vigor…. [T]his most excellent of books is in many ways about books, and will have the reader ordering all manner of new ones after reading commentary that springs from the reading of them by Will. American Happiness teaches a great deal, but also sets the stage for a great deal more learning…. Easily the best part of what is so good on so many levels is what the reader will learn about the world, past and present…. This is a soaring book…. With American Happiness, there’s a sense that Will himself is happier about the world. This is not to say that he’s thrilled about where the proverbial “we” are in total (see the introduction), but this curation is not that of someone who sees the U.S. in decline."—Forbes

“A wise compendium on the tumultuous whirlwind that has been the last decade or so of American life. In addition to its historical, economic, and anthropological value, the book demonstrates Will’s rare combination of two unexpected qualities: attentiveness and toughness. He is attentive to the subtle (and sometimes not so subtle) cultural shifts shaping everyday life in America, and tough on Americans who wish to turn their backs on what has driven American success since the country’s inception: its unapologetic commitment to capitalism….The strength of Will’s critique stems once again from his willingness to go against the grain….No other book summarizes better the torrents of American life over the last decade or so. There is much wisdom in what will undoubtedly be an important historical record for this epoch.”—The Public Discourse

“A joy to read…If you read or listen to one column every day for the next 192 days, you’ll widen your interests, deepen your insights, and enjoy fascinating conversations with family and friends.”—Your Weekly Staff Meeting

"A deeply erudite, always opinionated commentator, Will laments the erosion of literacy and advocates for binge-reading rather than binge-watching, and he parses the intricacies of recent Supreme Court cases with authority....A gentleman scholar and scold, Will continues to wield his sharp, discerning prose."
—Kirkus Reviews

"[An] erudite and eclectic collection....Will's eulogies of conservative leaders...are particularly rich and insightful....Will is a consistently provocative and articulate opinion-maker. Fans will delight in this expansive survey of his recent judgments."—Publishers Weekly

Praise for The Conservative Sensibility


"A thoughtful, elegant reflection on American
conservatism and the Founders' political thought."—The Atlantic

"A blockbuster -- if a book so thoughtful and learned and graceful can be called a 'blockbuster.'"—Jay Nordlinger, National Review

"When you read a work as wise, incisive and superbly written as this one, you rightly assume it was produced by a first-rate mind."
—The Wall Street Journal

"Staggeringly good. Easily one of the best books on American Conservatism ever written."—Jonah Goldberg

"[A] magnum opus..... Will still beats all his rivals in his ability to
combine high thinking with a shrewd capacity to understand day-to-day
American politics.... It is hard to think of any of today's angry young
"movement" conservatives surviving in journalism for fifty years, as Mr.
Will has, and still having enough to say to produce a big book at 78."—The Economist

“The author toils in the fields of the consequential rather than ephemeral. As this collection proves (yet again), Will’s writing rises above journalism and is worth reading — and re-reading.”—The Interim

“These columns, written between 2008 and 2020, are written mostly with the same elegance, persuasiveness, and lucidity that have marked Will’s long career as one of the nation’s most perceptive political commentators.”
—New York Journal of Books