I'm the Man: The Story of That Guy from Anthrax (Paperback) 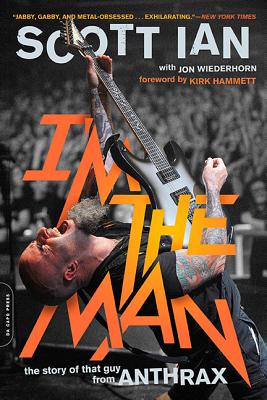 I'm the Man: The Story of That Guy from Anthrax (Paperback)


Available to Order - Usually Arrives in Our Store in 4 to 7 Days
I'm the Man is the fast-paced, humorous, and revealing memoir from the man who co-founded Anthrax, the band that proved to the masses that brutality and fun didn't have to be mutually exclusive. Through various lineup shifts, label snafus, rock 'n' roll mayhem, and unforeseen circumstances galore, Scott Ian has approached life and music with a smile, viewing the band with deadly seriousness while recognizing the ridiculousness of the entertainment industry. Always performing with abundant energy that revealed his passion for his craft, Ian has never let the gravity of being a rock star go to his shaven, goateed head.

Ian tells his life story with a clear-eyed honesty that spares no one, least of all himself, starting with his upbringing as a nerdy Jewish boy in Queens and evolving through his first musical epiphany when he saw KISS live on television and realized what he wanted to do with his life. He chronicles his adolescence growing up in a dysfunctional home where the records blasting on his stereo failed to drown out the sound of his parents shouting at one another. He sets down the details of his fateful escape into the turbulent world of heavy metal. And of course he lays bare the complete history of Anthrax -- from the band's formation to their present-day reinvigoration -- as they wrote and recorded thrash classics like Spreading the Disease, Among the Living, and the top-twenty-charting State of Euphoria.

Along the way, Ian recounts harrowing, hysterical tales from his long tour of duty in the world of hard rock. He witnesses the rise of Metallica, for which he had a front row seat. He parties with the late Dimebag Darrell while touring with Pantera and gets wild with Black Label Society frontman and longtime Ozzy Osbourne guitarist Zakk Wylde. He escapes detection while interviewing Ozzy for "The Rock Show" while dressed as Gene Simmons and avoids arrest after getting detained on suspicion of drugs while riding the tube in England with the late Metallica bassist Cliff Burton.

In addition, I'm the Man addresses the trials and tribulations of Ian's life and loves. He admits his foibles and reveals the mistakes made along the way to becoming a fully-functioning adult. He celebrates finally finding peace and a true sense of family with his wife, singer/songwriter Pearl Aday, and examines how his world changed after the birth of their first son.

I'm the Man is a blistering hard rock memoir, one that is astonishing in its candor and deftly told by the man who's kept the institution of Anthrax alive for more than thirty years.
Scott Ian is cofounder, rhythm guitarist, and chief lyricist of Anthrax. He is an AC/DC fan and lives with his wife and son outside Los Angeles.

Jon Wiederhorn is co-author of Louder Than Hell: The Definitive Oral History of Metal and Ministry: The Lost Gospels According to Al Jourgensen. He is a senior writer at Revolver and a contributor to Guitar World, Yahoo.com, eMusic, and Niosey.com. He lives in Brooklyn, New York, with his wife and two children.

Revolver, 10/14/14
““[A] compelling memoir…Like any good rock bio, I'm the Man abounds with tales of debauchery, fisticuffs, and other insanity on the road…The book is also full of revelations…All this keeps the pages turning. But I'm the Man is not just a tell-all. It's an inspiring tale of perseverance in the face of endless lineup and label changes, rehearsal room fires, and a fickle music industry–and it's also a cautionary tale…And Ian pulls no punches—many, at himself—when discussing how the craziness of the touring life makes ‘normal' life almost impossible…I'm the Man proves to be the perfect title for the book, because what ultimately crystallizes is a rounded picture of Ian, not as a metal icon, but as a man: one who tried and sometimes failed but always kept trying, and can look back on it all with honesty and clarity.”

Eternal Terror, 10/20/14
“An interesting and inspiring read…No stone is left unturned in this book when it comes to Anthrax…Ian is brutally honest and tells it like it is…A fast-paced, funny, revealing and at times tragic account of how a geeky boy from New York made it in the world of music and just how thin the line between devastating and triumphant really is, not just in the world of music, but in life in general. The book strikes a really nice balance between the uplifting aspects of being in a metal band as well as all the bullshit, backstabbing, setbacks and pain that ensue from it all…One need not be a fan of Anthrax, S.O.D. or even The Damned Things in order to enjoy this book. It is so well-written, humorous, heart-warming and even downright insane in places that one cannot avoid being moved by it…A captivating and fascinating read. Highly recommended!”

My Big Honkin Blog, 10/25/14
“It is [Ian's] average Joe-ness that makes his story of struggle, determination and persistence, told in the new bio, I'm the Man, so interesting…You can't help but root for the guy. The fact that he didn't go out of his way to screw things up like so many rockers do also tends to make the story unique…This one is a great read whether you're a fan or not.”

Heavy Metal About.com, 10/13/14
“There aren't a lot of bands where the rhythm guitarist is the most high profile member of the band, but Scott Ian has always been the heart of Anthrax…[Ian] isn't afraid to say what's on his mind, and the book reflects his willingness to tell it like it is, even if it sometimes doesn't put him in a very flattering light…Ian really knows how to tell a story and the book is extremely compelling. It's a great blend of the events that shaped him and Anthrax, his personal life and crazy and hilarious tales from throughout his life. It's a must-read for any fan of Ian and Anthrax.”

HornsUpRocks.com, 10/15/14
“One of the best books you will ever read! It's honest, it's entertaining and full of stories of one of the guys to blame for Heavy Music being what it is today…Whither you are a veteran musician or you are just starting out, this is a book you must read and absorb as the amount of knowledge and lessons of perseverance that Scott shares will make you a better musician. Hell, this book will inspire any human being to have big goals and to never stop working in order to accomplish those goals.”

NoEcho.net, 10/13/14
“One of the most outspoken and ubiquitous figures in the heavy metal community, it was inevitable that Ian would someday write an autobiography…The guitarist is a gifted storyteller, conveying each memory with an enthralling balance of humor, wit, and self-awareness…Along with Metallica, Slayer, and Megadeth, Anthrax are part of the "Big 4," and Ian offers up the kind of insider stories behind all the groups that trivia hounds will eat up…It doesn't matter if you're a devout Anthrax follower, or just a casual fan of the group, I'm the Man is a fun read, packed with juicy stories from Ian's colorful career on and off stage…Just like the song it was named after, I'm the Man is irreverent, hilarious, and, at times, aggressive.”

LithiumMagazine.com, 10/14/14
“Scott Ian has, in his many decades as a touring musician, shared the stage with pretty much everyone who is anyone in hard rock and heavy metal. And he seems to have a photographic memory, as his power of recall has the uncanny ability to virtually bring the reader into the room with him…I'm The Man will please Anthrax fans. It will also please music fans who maybe don't know so much about Anthrax. The passion behind his band, perseverance over numerous hardships, and the ability to recount tales gone by with an often humorous stilt makes for an entertaining read.”

Stereo Embers, 10/13/14
“I'm the Man isn't a typical rock star autobiography. Although it has its share of hilarious stories of drugs and partying, the book refreshingly focuses on the guiding light of Scott's life: music and, in particular, the music of Anthrax…The book is a thrilling ride through the ups and downs of being in a rock and roll band…Moreover, I'm the Man will give you a greater understanding of how the Big 4 thrash bands—Anthrax, Megadeth, Slayer, and Metallica—somehow managed to change the course of heavy music, steering it away from the hair metal of the 1980s through sheer hard work, will, and perseverance…Scott Ian really is the man—and you'd do yourself a disservice by not reading his thrilling autobiography.”

This Is Book's Music, 10/18/14
“You might read the book thinking it will be nothing but inside stuff about the band and the recording industry, and it does touch on all of this quite well. It also has Ian looking at the world from a personal perspective, to show how he loves his music but is also someone with a mind and a sense of humor.”

The Real Rene, 10/14/14
“Scott Ian is such a cool and down to earth guy that you feel he is right there with you telling you all these stories. This is not a book about drugs or groupies (well maybe some) but rather a compelling story about one of the coolest guys in rock n roll history.”

Media Mikes, 10/20/14
“I'm the Man is much more than a collection of road stories as Ian delves deep in to his personal experience with love, life and all things Dimebag Darrell…Over the book's 316 pages Ian is candid and unabashed…A solid read…For newer fans and for those who have followed Scott ‘Not' Ian from the early days this book is for you.”

Praise for I'm the Man

Jewish Telegraph , 9/19/14
“Scott writes with real honesty…I'm the Man stands up as a great insight into one of metal's leading figures. And you don't have to be a thrash or rock fan to enjoy it.”