A Funny Thing Happened on the Way to Heaven: (Or, How I Made Peace with the Paranormal and Stigmatized Zealots and Cynics in the Process) (Paperback) 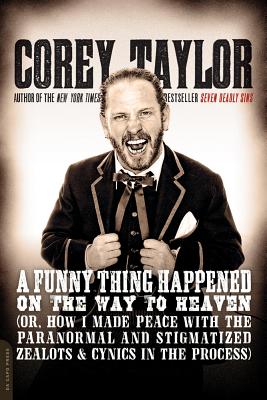 Corey Taylor has seen a lot of unbelievable things.

However, many of his most incredible experiences might just shock you. For much of his life, the Grammy Award-winning singer of Slipknot and Stone Sour and New York Times bestselling author of Seven Deadly Sins has brushed up against the supernatural world. Those encounters impacted his own personal evolution just as much as headlining at Castle Donington in front of 100,000 people at Download Festival or debuting at #1 on the Billboard Top 200.

Since growing up in Iowa, his own curiosity drew him into situations that would've sent most people screaming scared and running for the hills. He's ballsy enough to go into the darkness and deal with the consequences, though. As a result, he's seen ghosts up close and personal, whether while combing through an abandoned house in his native Iowa as a child or recording an album in the fabled Houdini Hollywood Hills mansion. He's also got the memories (and scars) to prove it. For some reason, he can't seem to shake these spectral stories, and that brings us to this little tome right here...

At the same time, being an erudite, tattooed, modern Renaissance Man, he was never one for Sunday Service. Simply put, he's seen ghosts, but he hasn't seen Jesus. Taylor especially can't find a reason why people do the insane things they do in HIS name. That's where everything gets really interesting.

His second book, A Funny Thing Happened on the Way to Heaven, compiles Taylor's most intimate, incredible, and insane moments with the supernatural. His memories are as vivid as they are vicious. As he recounts these stories, he questions the validity of religious belief systems and two-thousand-year-old dogma. As always, his rapid-fire writing, razor sharp sense of humor, unbridled honesty, and cozy anecdotes make quite the case for his point. You might end up believing him or not. That's up to you, of course.

Either way, you're in for a hell of a ride.

Corey Taylor is the New York Times bestselling author of Seven Deadly Sins, A Funny Thing Happened on the Way to Heaven, and You're Making Me Hate You. Lead singer of rock bands Slipknot and Stone Sour, Taylor has earned eleven Platinum records, forty-three Gold records, and a Grammy. A native of Iowa, he spends his time between there, Las Vegas, and his suitcase.

"He's done it again, folks, put out a piece of art and work that will leave you speechless and thinking harder than you have in a while. Will have your hair standing on end, chills down your spine while making you laugh hysterically at some parts...A well-written, in-depth, intellectual and bone-chilling piece of work that will go down in history as one of the best books written by a metal singer of all time."
—Front Row Report

"[A] literary masterpiece...Witty and wroth the read."
—Examiner.com

"Taylor's enthusiasm for his topic and sheer wonder is infectious; he makes for a humble, charming host."
—Publishers Weekly

"Taylor is an engaging narrator, skewering organized religion and his own poor choices with equal fervor."
—San Francisco Book Review

"This book is prat autobiographical and part suspense novel...The writing style is first person but even more than that, it's like you are sitting at the bar and [Taylor] is telling you a story. This is a whole scary as hell motion picture captured in the printed word."
—Examiner.com

"Taylor's narrative voice is rich with quick intellect and roaring humor. If one of the main jobs of a writer is to entertain the reader, then Taylor is a literary circus act...The book is a witty and thought-provoking read, and has the intimate feel of a good ghost story told around a campfire--by your most offbeat and hilarious friend."
—PopMatters.com

"At several points throughout the reading of this book the hair on my arms was standing completely straight up."
—MediaMikes.com

"[Taylor's] witty sense of humor and writing style really pulls you in with every word...If you want a fun read about the paranormal and some laugh out loud moments from one of the coolest guys in music pick this one up."
—Sound Crave Magazine

"[Taylor's] follow-up flows with the same easy, conversational cadence of his debut, replete with acres of legitimately funny, self-effacing observations, as well as compelling insights, scientific research and of course, telltale doses of the swagger and bravado...Taylor's affable style is perfectly-suited to spinning yarns...A Funny Thing Happened on the Way to Heaven offers readers a thought-provoking and hellaciously-entertaining experience."
—The Weeklings