Indestructible: The Unforgettable Story of a Marine Hero at the Battle of Iwo Jima (Paperback) 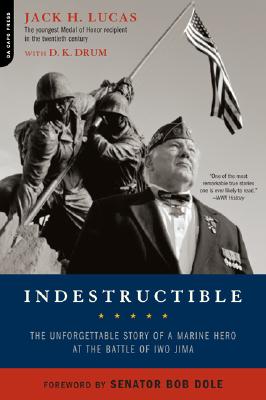 Indestructible: The Unforgettable Story of a Marine Hero at the Battle of Iwo Jima (Paperback)


Email or call for price. Handling fee may apply.
During the battle of Iwo Jima, two enemy grenades landed close to Jack Lucas and his buddies. Jack threw himself on one of the grenades, grabbed the second, and pulled it beneath his body. His buddies were saved, but Lucas was badly injured. Miraculously, he survived-but just barely. For this brave action seventeen-year-old Jack Lucas from North Carolina became the youngest Marine in history to receive the Medal of Honor. Indestructible reveals the rocky road that led Jack Lucas to Iwo Jima, his arduous recovery, and the obstacles Jack overcame later in life. Jack's moving and powerful memoir is a testament to America's greatest generation.
Jacklyn "Jack" Harold Lucas received the Medal of Honor from President Harry S. Truman. He lives in Hattiesburg, Mississippi. D.K. Drum collaborated with Jack Lucas and lives in North Carolina.

Teacher Librarian “Bookmarkit”, 12/08
“A riveting story of war and bravery.”