Lone Star: A History Of Texas And The Texans (Paperback) 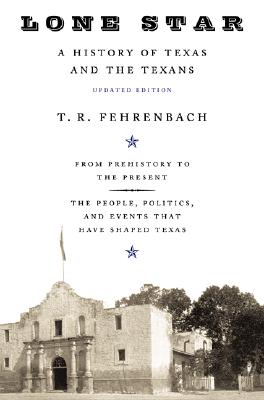 Lone Star: A History Of Texas And The Texans (Paperback)


Available to Order - Usually Arrives in Our Store in 4 to 7 Days
An insider's history of Texas that examines the people, politics, and events which have shaped the Lone Star State, from prehistory to the modern day

Here is an up-to-the-moment history of the Lone Star State, together with an insider's look at the people, politics, and events that have shaped Texas from the beginning right up to our days. Never before has the story been told with more vitality and immediacy. Fehrenbach re-creates the Texas saga from prehistory to the Spanish and French invasions to the heyday of the cotton and cattle empires. He dramatically describes the emergence of Texas as a republic, the vote for secession before the Civil War, and the state's readmission to the Union after the War. In the twentieth century oil would emerge as an important economic resource and social change would come. But Texas would remain unmistakably Texas, because Texans "have been made different by the crucible of history; they think and act in different ways, according to the history that shaped their hearts and minds."
The late T. R. Fehrenbach, a native Texan, authored several books, including Fire and Blood: A History of Mexico and Comanches: The Destruction of a People, both available from Da Capo.