The Will to See: Dispatches from a World of Misery and Hope (Hardcover) 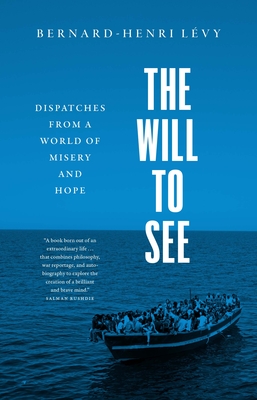 The Will to See: Dispatches from a World of Misery and Hope (Hardcover)


On Our Shelves Now
An unflinching look at the most urgent humanitarian crises around the globe, from one of the world’s most daring philosopher-reporters

“Call[s] on people not just to see the world, but to be moved and interested by what they find there, and to do something about it.”—Anne Applebaum, The Atlantic

“Fierce and elegant, Lévy’s musings will be of profound interest to any reader of modern continental philosophy.”—Kirkus Reviews, starred review

In a deeply personal introduction, Lévy recounts the intellectual journey that led him to advocacy, arguing that a truly humanist philosophy must necessarily lead to action in defense of the most vulnerable. In the second section, he reports on the eight investigative trips he undertook just before or during the coronavirus pandemic, from the massacred Christian villages in Nigeria to a dangerously fragile Afghanistan on the eve of the Taliban talks, from an anti-Semitic ambush in Libya to the overrun refugee camp on the island of Lesbos. Part manifesto, part missives from the field, this new book is a stirring rebuke to indifference and an exhortation to level our gaze at those most hidden from us.
Bernard-Henri Lévy is a philosopher, filmmaker, activist, and author of more than thirty books, including The Virus in the Age of Madness. He is widely regarded as one of the West’s most important public intellectuals.

“Call[s] on people not just to see the world, but to be moved and interested by what they find there, and to do something about it.”—Anne Applebaum, The Atlantic

“The renowned French philosopher and activist delivers an intellectual biography-cum-manifesto that demands that we face and document the world’s horrors. . . . [Lévy] advocates for politically engaged journalism that does not pretend to objectivity. The writer, he insists, must make a stand in the face of genocide, fundamentalist intolerance, and other assaults on human rights and democracy.”—Kirkus Reviews, starred review

“Ever the interventionist, Lévy implores us to break free from the chains of apathy.”—James Kirchick, Air Mail

“This is a book born out of an extraordinary life, much of it spent plunging into the world’s most troubled and crucial places, a life committed to an internationalism that is not owned by the powerful, and to visions of France, Europe and liberty that can’t be understood by bureaucrats. A passionate, engaged book that combines philosophy, war reportage, and autobiography to explore the creation of a brilliant and brave mind.”—Salman Rushdie